After joining Genesis in 1971, guitar virtuoso Steve Hackett stayed with the band for six years and contributed to six studio albums and three live outings (generally considered to be their golden era). It’s the second of those live albums which this disc celebrates, along with other choice fan favourites, and assembles them as Genesis Revisited Live: Seconds Out & More. It’s a double album, much in the tradition of those monolithic releases from the ‘70s, and it can stand proudly alongside the original Seconds Out.

In the autumn of 2021, Steve Hackett and band embarked on their first UK tour in almost two years. On 24th September of that year, the band stopped by Manchester’s O2 Apollo, filming and recording that evening for prosperity. Many of Steve’s previous tours revolved around a certain theme, and on this occasion it was the turn of the Seconds Out album, and you get the feeling that Steve was righting a few wrongs (more on that later). Before we’re treated to Seconds Out we are blessed with a few modern classics, beginning with the persistent ticking of ‘Clocks – The Angel Of Mons’ (from ‘73 album Spectral Mornings) which raises the curtain in fine style as Steve’s guitar floats ethereally, and is anchored by the weighty keyboards. It’s a fine introduction which whets the appetite for the coming set.

Featuring a guest spot from Amanda Lehmann (the first of four) we’re brought bang up to date with ‘Held In The Shadows’ (from latest LP, Surrender Of Silence), and the first thing to notice here is Steve’s guitar tone. It’s lovely and warm, and seems to reach out from the speakers; it’s as if he’s been soaking his guitar strings in honey, and the sound he produces is as equally sweet, and it holds a capacity crowd spellbound. During the songs quieter moments you can hear a pin drop, and that’s not only testament to awe Steve’s playing commands, but the clean, crisp production, and it’s one that turns The Apollo into a huge cavernous space during ‘The Devil’s Cathedral’. ‘Shadow Of The Hierophant’ (from Steve’s debut solo album) was originally slated for Genesis’ Foxtrot, but was deemed unsuitable, therefore it makes a nice precursor to the second set and Seconds Out.

It has been observed that Steve Hackett was “mixed out” of Seconds Out because of his audacity in leaving the band (he announced to the band he was departing two months before the album was released). I don’t know if that’s true, but compared to some live bootlegs that are circulating from that era, his guitar does seem quieter on Seconds Out. That’s been set right on this release, not in a megalomaniacal, egotistical way, but Steve’s guitar is where it should be; prominent, but not at the expense of the other instruments. Following the original tracklisting, this album offers a faithful rendition of Seconds Out, and while you won’t find the tracks behaving in strange new ways, the older Gabriel material is handled better by vocalist Nad Sylvan than it was by Phil Collins. It’s the extended tracks which work best, and ‘Supper’s Ready’ perfectly illustrate why Genesis were such an influential band (stand up, Marillion).

As Steve and band deliver these classic tunes you can almost feel the electricity that’s sparking between stage and crowd. Sometimes the stars align and a band will deliver a once in a decade performance. This was such a night. 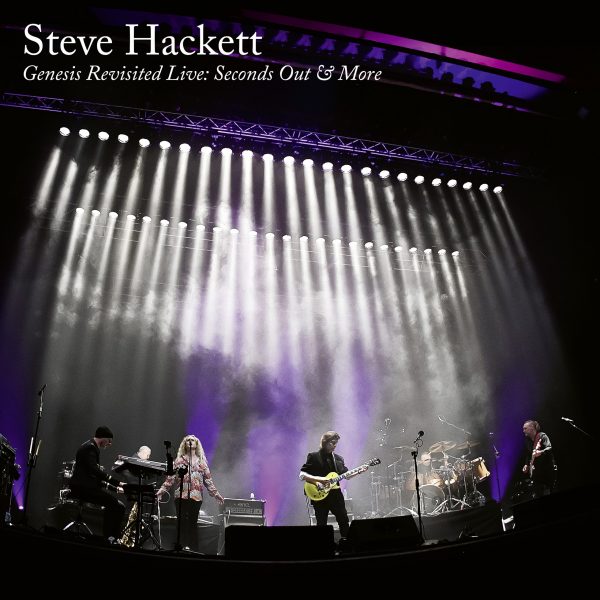