With Genesis seemingly now on almost permanent hiatus, despite the frequent rumours about the possibility of a reunion, Steve Hackett has become the standard bearer for the band, at least for their early incarnations. His regular Genesis Revisited tours can sell out shows around the world, and are always a hugely enjoyable experience, not least due to his care and attention to detail in presenting the music. For this particular tour, in early 2018, he added another variation by augmenting his own band with Birmingham’s own Heart of England Philharmonic Orchestra, who have some experience in playing alongside rock bands, not least on the ‘Symphonic Zeppelin’ tours around the UK in recent years. Using an orchestra to play this music, which, let’s be frank, includes some of the most important and influential songs in the entire history of this beast known as Progressive Rock, makes perfect sense, as one of the key influences when it all began was classical music, and having attended the show at Symphony Hall on this particular tour, the overall effect of adding the classical musicians was very effective and often moving and even awe-inspiring.

It seems to be tradition now that the tour is followed by a permanent record, in this case a double CD and Blu-Ray package, the latter with a 5.1 surround sound mix, all recorded and filmed at the Royal Festival Hall in London. Sadly the 5.1 mix wasn’t available for review, so I can’t make any judgement about that, although hearing this music in surround sound is something I really am looking forward to. There are also some extras on the Blu-Ray, including some behind the scenes footage and the promos from Steve’s last solo album ‘The Edge of Light’, again not available for review, but on past releases, these have usually been well worth watching, so hopefully these will be worthy additions to this package. The DVD itself is really well filmed, a good mix of close-up and wider ranging shots, including of the orchestra, which is welcome, as they played a big part in making these such memorable shows. I have to say, though, filming at the Festival Hall, rather than at Symphony Hall, as they did on the previous tour, does make some of the auditorium and audience shots a little less spectacular.

Musically, though, this live album is absolutely first class and over time will quite possibly become my favourite of all Steve’s live albums. His own band have played together so long they have an almost telepathic understanding, and Nad Sylvan gives a tremendous performance in taking on the vocal roles of Peter Gabriel and Phil Collins. A mention too for drummer Gary O’Toole, who was taking part in his last tour with the band. As well as drumming, he also sings, and his performance of ‘Blood on the Rooftops’ is spine tingling. Adding the orchestra genuinely gave this music an extra dimension, not least because care had been taken to compose the extra parts, rather than have them play existing ones. ‘Firth of Fifth’ in particular has even more depth and impact, and is transformed into something almost cinematic, becoming almost my favourite ever version of this iconic song, and the epic closing parts of ‘Shadow of the Heirophant’ and ‘Supper’s Ready’ are phenomenal, the band and orchestra fusing together to become a single, overpowering unit. Standing ovations are almost obligatory these days, but in this case richly deserved.

There are also some of Hackett’s solo tracks in the show, and it struck me that ‘The Steppes’ was the first song in the set to really bring forward the fusion between the band and orchestra. I was slightly disappointed in the rest of the setlist, it was a little predictable, sometimes a surprise choice of song adds something to a show, but perhaps this was dependent on what would suit the orchestra. Minor quibbles aside, this is a great release, and fans of early Genesis and Hackett himself can regard it as an almost essential purchase. 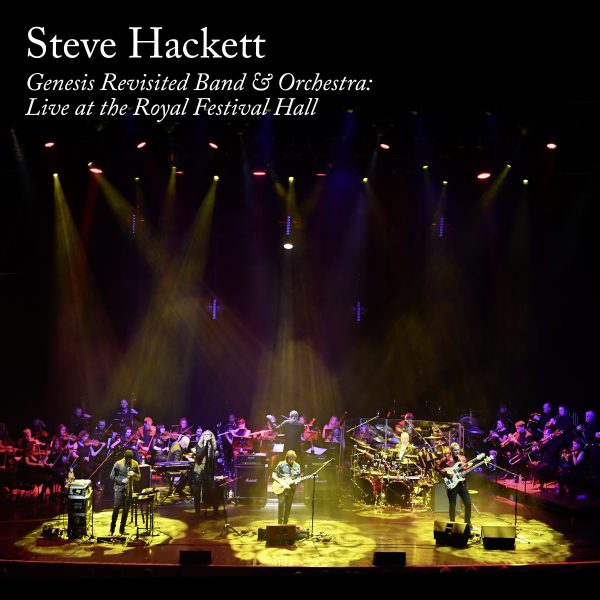