Steelhouse Festival are proud to announce a triumvirate of sensational British talent to complete the line up for this year.  The Wildhearts will be the penultimate band on Sunday 25th of July, directly before them it’s Steelhouse stalwart, Bernie Marsden featuring Skin/Hand Of Dimes vocalist Neville MacDonald playing a Whitesnake greatest hits set. Meanwhile Saturday’s bill is completed by Wayward Sons. This year’s Steelhouse Festival is headlined by Anthrax and Europe. 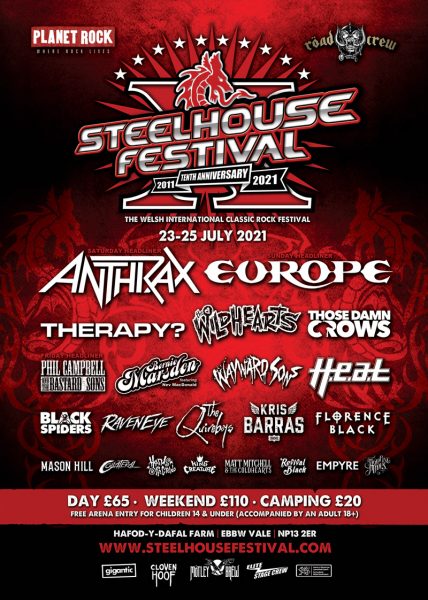 Promoters Mikey Evans and Max Rhead said, “We’re delighted to announce the return of three of our favourite British acts for 2021. Wayward Sons played an unbelievable set in 2017. Since then they’ve released two incredible albums, toured tirelessly and seen their fanbase grow. In 2018, The Wildhearts turned in one of the most memorable SH sets ever… It simply was a case of ‘when’ they would return and so we’re delighted to see that happen for our 10th anniversary…And of course, marking such a milestone wouldn’t be right without the legendary Bernie Marsden. His history with us goes back to our early club days as does Neville MacDonald who’ll be joining him to belt out a set packed to bursting with original Whitesnake classics.

“It makes us so happy to be able to announce something positive for the summer. There’s a feeling of optimism in the air following the announcement by the UK government. Couple that with the incredible vaccination roll-out and thankfully, the week-on-week fall in figures relating to the pandemic, we feel this is an appropriate time to announce the final additions to our bill…Thanks again to the Steelhouse family for their patience, understanding, sticking with us and wanting the festival to move forward”

Toby Jepson of Wayward Sons added, “It is with enormous pride that Wayward Sons return to the mountain, and in the wake of what the whole world has experienced, it is an honour to be asked to appear as part of what will surely be an event long remembered”.