Drugs, distortion, behemoths of riffs – what’s not to love about stoner rock?

Another week, another stoner album but, hey, who’s complaining when the genre is currently so vibrant and the music so good. And what’s not to love about stoner rock? It’s music stripped to its primal essentials – bare-bones instrumentation, drugs, distortion, behemoths of riffs, pummelled endlessly into submission and barely a sign of mellow acoustic interludes or ballads. The best of these bands all seem to bring something unique to the table, be it hazy Summer of Love psychedelia, deep dark delta blues or, as in London four-piece Steak’s case – high concept comic book cool! The band have so far released 2 of a proposed 4 EP story arc in which the they are turned into badass superheroes (courtesy of DC Comics artist Eduarto Ferigato) and do battle with the fiendish Lazarus and judging by the stunning cover art of Slab City the story continues here!

The album begins with the crackle of radio interference (something of a recurring theme) before a bruising, booming riff crashes into the room and Kippas vocals hit you – what a voice! He sounds for all the world like an ornery, weather bitten ole bastard in an oily check shirt with a shotgun slung over his back… with a dash of Eddie Vedder’s heart and soul. ‘Liquid Gold’ is slow moving but certainly not laid back, this tune has ill intent! Its construction is epic (do stoners have ambition?), its hypnotic groove chugging away menacingly before kicking dust into our face as it takes off into a gallop – guitarist Reece soloing away wildly over the grinding repetition.

The album is surpisingly heavy, several songs sounding like a messy collision between Sabbath and Motorhead. The riff on ‘Hanoid’ (Hanoid? Anyone?) almost breaks up completely under the weight of its own distortion while several of the albums feedback codas remind me of ‘Ragged Glory’, Crazy Horses masterwork. ‘Pisser’ is, as the title suggests, a dirty f****r – biker rock having been given powerchord sandblasting and the lethargic groove of ‘Machine’ is all Steppenwolf on downers, until the huge, nether region vibrating midsection (too much info… sorry).

There’s a great deal of shouting involved – things sound urgent with Kippa yelling into the black hole created by the sonic boom of the band, who, as the albums fades out, become increasingly desperate, howling into the ether. They sound like madmen, holy fools, prophets at the gates of disaster screaming to be heard. And heard they should be as this is thunderingly good stuff. 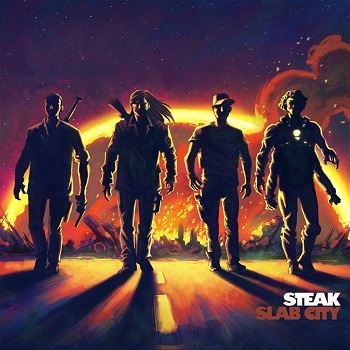