If ever a band knew how to mine a rich back catalogue it’s Status Quo. The Vinyl Singles Collection 2000 – 2010 is one in a series of remastered singles and B sides boxsets. In fact, the fifth and last. Until 2020 anyway.

As ever they are manufactured from seriously heavyweight vinyl – wearing the original artwork – and presented in a sturdy, Clyde-built box.

The fact that there are just the 10 singles here says so much about that decade, and indeed a study of the release dates suggests a specially written algorithm picked the most appropriate years and months.

And so, 20 tracks. Their cover of Tommy James and The Shondells’ pop classic ‘Mony Mony’ is matched with one of two blistering live versions of ‘Gerdundula’. The second, paired as B side to ‘The Party Ain’t Over Yet’ confirms that the band grow taller in the the live arena and the songs take wings.

And that is the story of post-2000 Quo. There was and still is a growing appetite among a more affluent demographic for seeing the band live. And that has switched the focus away from your old fashioned single toward your actual rock concert.

Well fine, so what?

It means, probably, that these singles chronicle the last decade of “frequent” studio single and album releases. So while we luxuriate in electric and electrifying live renditions of ‘Something ‘Bout You Baby’ and ‘Break The Rules’, not forgetting a jaw-dropping version of ‘Forty Five Hundred Times’, maybe we should devote more of our attention to studio tracks, like the perfect pop-boogie of ‘Jam Side Down’ or the magical English folk/country rock of ‘The Party Ain’t Over Yet’.

Parfitt is gone and Rossi is paying more attention now to solo ventures. Future studio recordings by the band will be thin on the ground. Worth remembering that singles were the lifeblood of Quo and most other rock bands when they began their career. The Singles 2000-2010 might be a slim volume of work, but unarguably, this new millenium material, crafted from several decades of acquired songwriting nous and studied studio skill, creating cracking songs like ‘You’ll Come Round’ and ‘All Stand Up’, will be just as deeply embedded in our memory. 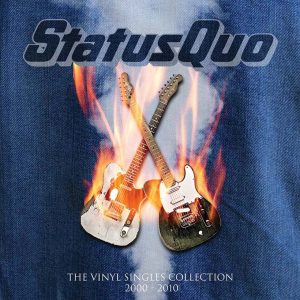