Altogether now, in your very best Poltergeist voices: “They’re baaaa-aaackk!”. One of the longest-serving bands on the planet, and pretty much the definition of ‘boogie-rock’, by the very mention of their name Status Quo have probably either piqued your interest or set your teeth immediately on edge. They’re one of those bands, see; like The Rolling Stones, a group that’s been going for half-a-century is just as likely to have irritated music lovers through over-exposure as to have gained new, younger fans discovering their once-ground-breaking stuff for the first time.

But this release is different. For the first time in 32 years, the ‘Frantic Four’ lineup of Francis Rossi, Alan Lancaster, Rick Parfitt and John Coghlan reunited in March to play a nine-date UK tour, which predictably sold out its initial seats within minutes. The Wembley show from this outing has been rendered onto DVD, alongside dual CDs of the Hammersmith show and a selection of DVD documentary footage. The limited-edition earBOOK also includes 120 pages of photographs from the tour and written commentary from Sky News correspondent Ian Woods. Midlands Rocks has been provided with just the two DVDs, leaving us to guess at what riches the full commemorative package may contain.

This reviewer had high hopes, having borne witness to a storming Status Quo show at the Bulldog Bash a couple of years ago; the first half-hour of the DVD unfortunately dashes them somewhat. Aside from the shock of seeing Parfitt and Rossi having shorn off the trademark locks/ponytail, there’s initially little to maintain any interest: the reunited Quo seem to have fallen to the level of the myriad bands playing their 70s hits every weekend in pubs across the country, with Lancaster taking the lead vocal on the first few blues-rock-by-numbers tunes, and drummer Coghlan being the most animated of the quartet.

The whole live DVD continues in much the same vein, with vocal duties being passed around the three frontmen; despite Bob Young being pulled out on harmonica for a few tunes in the latter half of the set, the presentation as a whole lacks the energy and panache required for a full-blown arena rock show, but is too massive of scale to pull off the ‘intimate blues bar’ vibe.

It’s a bit of a shame, really; the band clearly still have the chops to deliver the goods (Parfitt’s guitar solos in particular could teach ‘da yoof’ a thing or two about ‘less is more’; mid-set ‘4500 Times’ is nicely crunchy with some nifty time changes; ‘Big Fat Mama’ finally sees the boys making proper use of the expansive stage around an hour in), and as the crowd-pleasing closing salvo of ‘Down Down’ and ‘Roadhouse Blues’ prove, they’ve been doing this blues/rock thing for as long as anyone. They do noticeably miss the extra aural padding provided by the keys in the ‘full’ Quo lineup – even with all four members at full throttle the admittedly excellent mix still seems a little sparse.

The shots of the very white, very male, predominantly middle-aged audience before the requisite encore are quite telling, though: Status Quo are just as much of a niche market as anyone, and they play to that niche on the ‘Frantic Four’. It just so happens that their particular audience is an affluent and loyal one which will allow them to do pretty much what they want for as long as they want; this is a release for them, not for anyone discovering Status Quo for the first time, or even for the curious dabbler. Closer ‘Bye Bye Johnny’  (Johnny B Goode by another name) reinforces this, with few viewers still paying attention likely to reach for anything from the past decade in their record collection to follow. There’s no doubt that for those present this COULD have been a fantastic show, but on tape it falls sadly short.

A faintly uninspiring live DVD, then – so onto the extras. The hour-long ‘on-the-road’ documentary has some nice little insights for the music geeks (this reviewer included!) intrigued by the band’s backline or live sound requirements, as well as a couple of cameos, but the no-booze policy explicitly mentioned more than once means that backstage Quo these days resembles more an insurance brokers’ pre-afternoon-conference get-together than a hub of rock ‘n’ roll vitality. ‘Wheatgrass juice and f*ckin’ pumpkin seeds’, as Billy Connolly’s Huey may have put it. Three rehearsal room tracks, some single-song video outtakes and a ‘drummer-cam’ rehearsal tune round out the DVD, and do nothing to rinse out the taste in the mouth of a band going through the motions for one more payday. Worthwhile for dyed-in-the-wool Quo fans, pretty much a waste of time and money for anyone else. 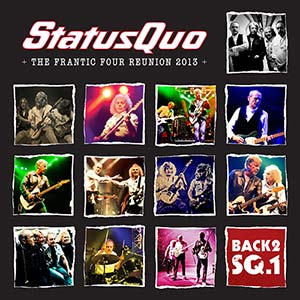