Reviewed by Brian McGowan and released by EarMUSIC 26 May 2017

Finding that their sixties’ psychedelic pop sound just didn’t have stamina was the best thing that could have happened to Quo. Their seventies’ reinvention as denim clad boogie warriors, with Ma Kelly’s Greasy Spoon has long been acclaimed as the band’s moment of genius, turning their career into a long and winding road movie that people pay to watch, time and time again (and again).

Despite the fact that they piled up hit single after hit single, Quo always looked at the album as a totemic work, a collection that adds up to something bigger than the individual pieces. The first clear distillation of that thought process was Blue For You, released in 1976. It is one of three significant Quo albums now reissued in remastered and extensively expanded form by original label Vertigo’s parent company, Universal Music.

For Quo it was pivotal, it displays an energy and intelligence that goes way beyond generic. Rick Parfitt’s ‘Rain’ and ‘Mystery Song’ signalled the emergence of a “new” songwriting talent, one that rewired the boogie juggernaut in mid flight, adding bite and daring and a harder rocking sound, revealing just a glint of metal. On the second CD nearly 3 minutes is trimmed from the “single” edit of ‘Mystery Song’, by removing the chiming guitar and whispering harmonies that made for such an intriguing intro on the album . . . but radio friendly packages are seldom designed for the patient listener.

This second CD is filled to the brim with live tracks, B sides and demos. The live stuff primarily comes from the band’s Japanese tour in 1976. The 6 pummelling, piledriving tracks from their Osaka gig should have come with a health warning. Raw, raucous and right in your face.

Two tracks are buried unceremoniously in among the demos. Both were originally country music “question and answer” hit singles. ‘The Wild Side Of Life’ and ‘Honky Tonk Angel’ had a history all of their own, with chapters devoted to them in many a Country Music Almanac. They were unlikely candidates for Quo covers, and their inclusion here is a real treat.

Considering the relative primitivity of recording technology in the mid seventies, this is a cool piece of remastering, bringing clarity and punch to every track.

(The reviews of the remastered and expanded versions of Just Supposin’ and Never Too Late will appear here over the next few days.)

Blue For You Tracklist: 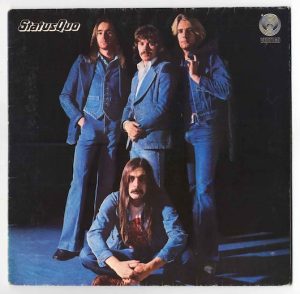