D’you know the best part of this job? It’s not the endless parade of rock stars that we get to hang out with almost daily, nor the limitless cash to be splashed on expenses, or the ’round-the-block queue of members of the opposite sex wanting to hook up with a journo (Ed: Huh?). Nope, the crowning perk is that with almost every release we’re assigned we get to learn something new, whether from the research on the artists involved or the emotional investment of the songs on the record.

100% Pure Frankie Miller hits the mark on both counts. Don’t be ashamed if you had to Google the man initially, so did I. If you can’t be bothered, the potted history goes something like “rock ‘n’ roll frontman realises gift as songwriter; writes for, records with and is covered by some of the biggest names in music; has tragic brain hemorrhage which brings career to a juddering halt; years later close friends (who also happen to be some of the most noteworthy figures in British rock) come together with his blessing to commit a load of his previously unrecorded material to tape.”

Sounds like something straight out of Hollywood, doesn’t it? I’m working on the Oscar-winning screenplay right now – in the meantime, cop a load of this. Masterminded by Quireboys frontman Spike, who sings on every track, the party includes luminaries like Ronnie Wood, Bonnie Tyler, Ian Hunter, Tyla and (for the first time together in decades, folks) the Free rhythm section of Andy Fraser and Simon Kirke, amongst MANY others; the ‘labour of love’ cliché trotted out in the press release rings true on this one, as Spike has assembled the crème de la crème over the past few years to bring this together.

It was totally worthwhile. The quality of the writing is unquestionable, and the multifarious contributions to the recording give this LP the facets of the polished diamond it undoubtedly is. Rock ‘n’ roll, country, blues, boogie-woogie, balladry – all the cornerstones of the greatest of modern Western music are present and correct, so honky-tonk piano and gliding lap steel rub shoulders with meaty electric guitars and driving drums under Spike’s ever-present Marlboro vocals to produce a complete work of touching intricacy.

It might be a bit ‘light’ for some (fans of The Quireboys’ brand of bar-brawl blues-rock may be better served by last year’s Beautiful Curse LP), but between the slow blues groove of opener ‘Brooklyn Bridge’ and out-and-out country ballad closer ‘Bottle Of Whisky’ you’ll be taken up by the like of the ‘boys-esque ‘Intensive Care’ and Ian Hunter-infused country-honk ‘Cheap Hotel’, and laid low by down-tempo tunes like the Springsteen-does-Motown ‘Other Side Of Town’ and the battle-of-the-gravel-garglers Bonnie Tyler duet ‘Fortune’.

Taken as a whole, 100% Pure Frankie Miller is the deserved continuation of a gifted songwriter’s work, and if you like your rock ‘n’ roll on the country or bluesy side, it’s pretty much essential listening. If your attention has been drawn to it by any one of the contributors – hell, they care about Frankie Miller’s work, why shouldn’t you? 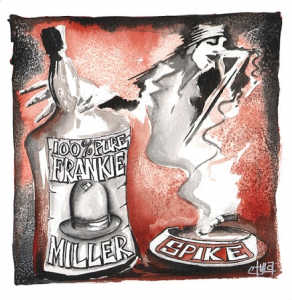