Gore to the core

Midlands death metal assassins Spawned From Hate are no strangers to the local live scene. Paul ‘queasy’ Castles has a gutful listening to their blood splattered self-release EP, Accelerated Butchery

Anyone with even a passing interest in the Midlands death metal scene can’t fail to have stumbled across these bloodied barbarians at some point. A regular attraction across Birmingham’s esteemed underground haunts, my most recent encounter with Spawned From Hate was at The Flapper where they more than held their own when sharing a bill with Barcelona bruisers Cerebral Effusion and southern slam crew Omnipotent Hysteria.

Accelerated Butchery consists of six suitably depraved cuts, starting with the muffled 50-second ‘Intro’ which pretty much sounds as though a man is having his arm eaten by a zombie. It makes 24 Hours A&E look like the Teletubbies but the serious stuff really kicks off with the EP’s title track itself which has all the subtlety of a Victorian hangman. A clash of guitars pulls us in before the deep prosaic death metal pounding starts to assert with vocalist Dan munching through a rusty tin can as he spews forth a diet of chewed up bile.

As its title suggests, the mood is littler cheerier on ‘Filth’ although if anything this is even more feral, with machine gun battering of the skins jostling for space alongside a distorted riff until the two factions collide like meteorites to form a crushing eye-popping breakdown over which Dan continues his destructive vocal onslaught.

The whole mood around Spawned From Hate is that of old school death metal, Cannibal Corpse the most obvious if you seek a comparison, and even the New York veterans would have to doff their hat to the commanding execution shown on a track such as ‘Force Fed Liquescent Decay’ where they run riot with some headspinning riff attacks.

Although band members actually come from north and south, the singer Dan is certainly from the Midlands and as such Spawned From Hate remain one of our very best exponents of traditional organ splitting death metal gore. If being savaged limb by limb works for you, then ditch your Walking Dead boxset and give Accelerated Butchery a listen. 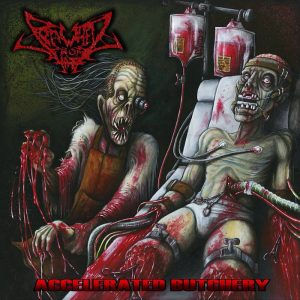