‘Cosmonoid’, the lead track of ‘Arcanum’ – album number two from Stoke on Trent psychedelic stoner merchants Space Witch – doesn’t acclimatize you to their sound gently. Feedback and an electronic hum launch you into a 16 plus minute doomy epic – coming on like a re-booted, re-tooled Hawkwind.

Its rumbling bassline and sci-fi bleeps take their time, lumbering calmly yet purposefully. Guitars join the party, adding mood and texture. And then they get big. Very big. A fuzz roar overwhelms and bulldozes the song slowly forwards, making it almost ambient in its droning insistence. The guitars and electronics meld, forming a fluid battering ram of descriptive noise, it’s the BBC Stereophonic Workshop with added pounding. The guitars become bigger (if that’s possible) – huge chords lead into a new movement, faster, proggier, almost Muse-like (but fuckloads sludgier). The guitars stampede over you and fling you into another new doomy section. It’s frankly awesome stuff, choirs join the fray and sing to the heavens. It truly is epic in every sense. If doom is played at the heavenly gates (unlikely I know but go with this) it’ll sound like this. The guitars engulf, the choir exhults, the electronics squeal and reach a climax and the finale is suitably immense. Phew…how do they follow that?

Well, with more of the same really, three more songs worth (yes, three. Yes, it is an album. These songs are looong). ‘Astro Genocide’ is a scuzzy slab of enormo stoner punk that reaches quite wondrous levels of heaviness. Vocals and tempo’s lurch violently as it hits levels of near grindcore ferocity.

‘Hex’ opens to the sound of the Devils own orchestra tuning up, you just know that whatever is about to come next will be fiendishly heavy. Bellowed vocals rant into the ether while the earth rends asunder under your feet. Guitars push the edges of their limits. There is mucho distortion, ‘heavy’ barely does this justice. This sound just Exists. It crushes. It’s almost beautiful in its construction and power, you admire it in the same way that Ash admired Ridley Scotts xenomorph…as a brutal, singular creature of single minded purpose. Its heaviness is pristine.

The fabulously titled ‘Battle Hag’ has more glorious aural demolition and 70’s B-movie electronica. It’s an almighty biker rock doom thing. And then it’s a proggy electronic thing…but you just know that this album won’t fade out on a mellow moment. And right on cue the guitars return…thunderously. A Mastodon-like attack blasts into an ‘everything louder than everything else’ moment before winding down…fricking heavily.

It’s big. Exhausting. Draining but brilliant. A 70’s Dr. Who episode soundtracked by a time-travelling Tangerine Dream/Electric Wizard supergroup. Sit back and enjoy. 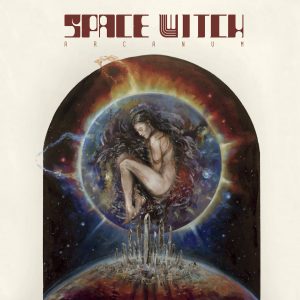