I had the distinct aural pleasure of seeing Seattle grunge forefathers Soundgarden at both Download and Hard Rock Calling back in 2012, and I am horribly excited to see if they deliver again tonight. And judging from my surroundings, I am not alone. 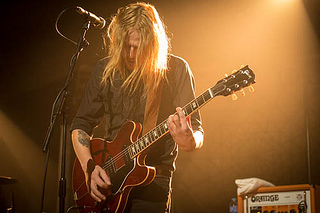 The O2 is packed and decidedly sweaty as Swedish support act Graveyard take to the stage. We are served up a smorgasbord of psychedelia and blues soaked rock from Joakim Nilsson et al, and it seems to go down well with the assembled throng. Heads are nodded in unison alongside Rikard Edlund’s bass rumblings. Standout tracks of the swift thirty minute set include ‘Ain’t Fit to Live Here’ with its rasping vocal line and the Led Zep inspired stomp of closer ‘Hisingen Blues’. A great start to the evening as well as a suitable choice.

As the clock ticks around to 9.10, the house lights dim once again and as that familiar intro resonates around the Academy and each band member come into view, the deafening cheers ring out. The hearts and loins of the female contingent present are stirred with the arrival of charismatic (and age defying) frontman Chris Cornell, who at 49 still looks as handsome as ever. I am blinded with love and strobe lighting as the guys launch into a storming version of ‘Let Me Drown’ and quickly follow suit with fan fave ‘Spoonman’ both from 1994’s magnum opus Superunknown. Lyrics are bellowed back and the mercury climbs that little bit higher as Chris mounts the speaker for a mid song guitar solo. It’s just a shame that the overall effect of such masterpieces is marred by the abysmal sound quality. Sadly, this has become a regular issue at this particular venue, but thankfully order is restored in time for ‘By Crooked Steps’ from latest album King Animal. It is a true testament to the songwriting skill and talent of this band that such new material can totally hold its own and stand up alongside the classics. Cornell’s vocal range is achingly good in a live capacity and tonight is no exception – his soulful rasp soars effortlessly between the high and low end of the octave.  The passion is etched all over guitarist Kim Thayil’s face while Ben Shepherd and Matt Cameron (on bass and drums respectively) ensure that the driving momentum is never lost in translation. 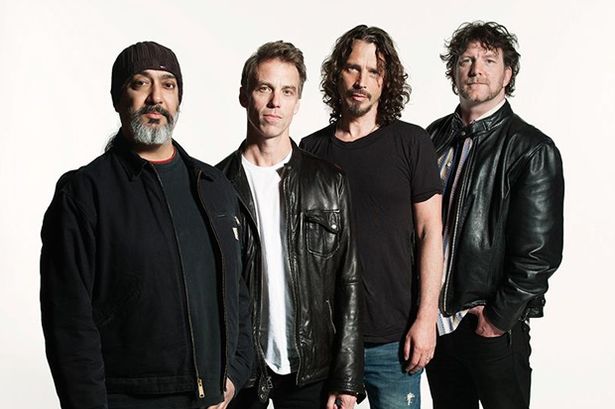 Heartfelt thanks are offered after each song and brows are wiped as Chris engages the adoring crowd with some ‘on the road’ banter. He divulges that Thayil had talked about how it had been ages since they played here and what “a great city” it was. This accolade segues smoothly into new track ’Been Away Too Long’ which is dedicated to Birmingham and its loyal fanbase. I’ll hazard a guess that this tale will be amended accordingly as the UK tour continues but it is a pleasing sentiment nonetheless!

The set list tonight (which I’m told is completely different for each date) is a delectable mix of the old and new, capable of whetting the proverbial appetite of the varied demographic present here. We are treated to an energetic romp through ‘My Wave’ and the brilliant ‘Get on the Snake’ – a song composed back in the days when the band toured the world in a van and never washed for six months. As the wonderfully dark, unsettling riff of iconic hit ‘Black Hole Sun’ lazily ripples about the dense air, the appreciation reaches fever pitch with hands and smartphones being held aloft. Whilst there is no denying Cornell’s outstanding vocal ability or the technical prowess of the rhythm section, there is a certain lacklustre to this particular performance. It is probably the definitive Soundgarden song but on this occasion, it is the sonic equivalent of a keg of dynamite refusing to be lit.

‘Fell On Black Days’, ‘Blow up the Outside World’ and ‘Rusty Cage’ round off an otherwise outstanding set from the band. There does however, appear to be some kind of onstage spat concerning Ben Shepherd at the end of the penultimate song. The issue looks to be technical and to the amazement of all concerned, he walks to the front of the stage and hands his bass to a photographer before exiting in a fit of apparent rage. There’s a brief respite before the boys return (including Ben) for an absolutely spectacular two song encore. ‘Jesus Christ Pose’ sounds just epic. Every hair on my body is on end as the mass of bodies ricochet off one another to the thunderous rumble of Cameron’s drumming. And Chris’ frenzied cries of “Now I know why you’ve been shaking!” on ‘Slaves and Bulldozers’ almost tears the roof of the place and incites sheer pandemonium. The song finishes but Thayil and Shepherd remain onstage and proceed to produce as much feedback noise as is humanly possible. A guitar is then thrown rowdily to the floor – rock ‘n’ roll baby. The crowd bays hungrily for more long after that final teeth rattling chord is uttered, and as everyone troops outside into the chilly Brum night, we all hope that Soundgarden don’t leave it so long ‘til next time.