It’s always a pleasure to see Jeff Scott Soto visit the UK, whether it be as part of one of his solo projects or as part of a band. For the various projects he’s involved with, the SOTO band is intended to reflect a heavier, darker side than the melodic rock he’s perhaps best known for, and the current tour is in support of the second Soto album, Divak .

This was part of a lengthy string of European dates, for which Swiss band Vanadine have provided support. They play a fairly straightforward style of modern melodic metal, which was listenable without being that memorable. Songs like ‘Make My Day’ definitely have something going for them, but live, you often need a bit more, something to stamp the band’s identity on the audience, and it didn’t really feel that was happening in the Slade Rooms, and the band’s seeming lack of stage presence and interaction with the crowd didn’t help matters. Again, perfectly listenable, but need more work as a live band. 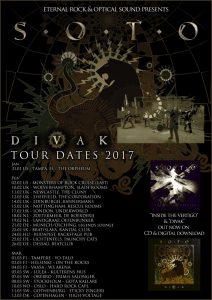 Stage presence has never been an issue with Soto. He’s long been one of the best and yet most under-appreciated frontmen around, and can be relied upon to give a show his everything, regardless of the circumstances. After the band opened with ‘Freak Show’ and ‘Weight Of The World’, songs whose groove and comparativeness heaviness was a fair indicator of what the rest of the show had in store, Soto made a point of announcing that the set would be concentrating on his Soto material, and although there would be one or two nods to his past, there wouldn’t be songs from his AOR career, from W.E.T. or from most of his other work. Perhaps ironically, this was followed by what was probably Talisman’s funkiest song ‘Colour My XTC’, cut with a few bars from a JSS solo track, ‘21st Century’, although the join was almost seamless, and not long after that, he went back to one of his contributions to the soundtrack of the Mark Wahlberg film ‘Rock Star’, a fast and furious ‘Living The Life’, which guitarist B.J. enlivened by adding some bars of ‘My Sharona’.

After band introductions, Soto dedicated ‘When I’m Older’ to his late brother Joey, but as the show went on it became more and more clear that Soto was being true to his word, as this was a different beast to most of the other times he’s played in this country, and his band were revelling in the opportunity to put a heavier, and yet stealthily funkier take on both his newer and older material. A brief nod to his years in the mighty talisman included the rarely performed ‘Tears In The Sky’ followed by the much more well know ‘I’ll be Waiting’ which traditionally has the crowd in full voice, and tonight was no exception.

From here things loosened up considerably, as exemplified by Dave Z’s bass solo, for which he donned an appropriate hat and played an instrumental version of ‘Billie Jean’, followed by a gentle piece of mickey taking of their band leader as he and B.J. harkened back to Soto’s ill fated stint in Journey and played a bass and vocal version of Journey’s ‘Don’t Stop Believing’. Suffice to say the crowd loved it, as, apparently, did JSS himself. After that it is time for lead guitarist Jorge Salan, to take his own solo, a fast instrumental that brought Joe Satriani very much to mind. Soto has built this band up over time, and it really is a phenomenally tight unit.

The main set concluded with a bit of a surprise, with Soto looking back to his time with Yngwie Malmsteen by giving ‘I Am a Viking’ and ‘I’ll See The Light Tonight’ a once over, played fairly straight, with Salan doing a fine job in putting his own stamp on the guitar parts. Again this went down really well with the crowd, although part of me might have preferred something from the Axel Rudi Pell years, perhaps ‘Warrior’? But that’s just quibbling. The encores continued the loose feel of the second part of the show, beginning with drummer Edu Cominato leading everyone in choruses of ‘We’re Not Gonna Take It’ and ‘I Love It Loud’, before Soto himself rounded off proceedings with ‘We Will Rock You’. As ever, Soto proved himself to be a terrific frontman and singer, who really should be better known in the rock world at large. It was a really good night in the Slade Rooms, but seriously, this man and his band deserve a bigger stage than this.