The influence Sweden’s legendary doom band Candlemass had on Dallas’ Solitude Aeturnus cannot be overstated. Originally formed in 1987, they were called Solitude (a name taken from a Candlemass song) and when they had to change their moniker for legal reasons they added the pig-Latin “Aeturnus” in honour of the Swede’s debut album (Epicus Doomicus Metallicus). However, it would be wrong to label these US doomsters as mere copyists, far from it, as they helped shape the current doom metal scene with two genre defining albums. They’ve been coupled here on Into The Depths Of Sorrow/Beyond The Crimson Horizon, a two disc set that captures the band in all their epic glory.

Never has a debut album arrived as fully formed as Into The Depths Of Sorrow, but that’s not to say it had an easy birth. Originally recorded in 1990, it laid dormant in the vaults of an indie label before being picked up by Roadrunner Records for worldwide release the following year. And when it finally dropped it was with the force of Thor’s hammer, and it sent reverberations around the globe. A Gregorian chant acts as a short, ominous introduction, and on an album that’s dense with thunderous drums and torrential riffs, it provides a ray of light. It’s one of those relentless riffs which kicks off opener proper, ‘Opaque Divinity’, and what a riff it is! Like an anchor tied to a drowning man, it drags the listener down to delirious depths and it is nigh on impossible to resist its gravitational pull.

Solitude Aeturnus proudly wear their influences on their sleeve, and the spectre of Candlemass looms over Into The Depths Of Sorrow (but, as with Sabbath, there’s not a band who hasn’t been swayed by the Swedish doom merchants). However, the inspiration they draw from other bands is used as a springboard to something new, rather than being nefarious copycatting, and theirs is a sound broad enough to incorporate elements of stoner and psych, and even the occasional thrash section. But doom is what they do best, and with only the intro clocking in at under five minutes in length, things tend to veer towards the epic. Case in point being ‘White Ship’ which appears like a ghostly vessel on the horizon, and has a course that’s dictated by unorthodox drum patterns. As with much of this album, closer ‘Where Angels Dare To Tread’ is a monolithic beast that’s richly textured with layered vocals, and ensures Into The Depths Of Sorrow ends in a grandiose fashion.

Into The Depths Of Sorrow was an assured debut that found the band making waves in the metal underground, but their next release placed them centre stage.

When a band release a game changing debut, it’s always a worry as to whether they’ll be able to recapture the magic. No fear with Solitude Aeturnus’ sophomore album, Beyond The Crimson Horizon. It took all that was great about its predecessor, tweaked a few edges, and produced a record that was even greater in scope. The first thing to note is the album’s production, this release sounds far bigger, warmer and richer than Sorrow, and subsequently when the guitars and drum lock in they pack a far heftier punch. It also brings the riffs to the fore, and ‘riff’ is the optimal word; this album has them in spades, and I’m sure that when this record originally dropped it had Tony Iommi turning green with envy. There’s also more light on this effort, those heavy passages are still in abundance, but now they’re enhanced by the quieter, and seems far weightier by contrast.

After an other-worldly, dreamlike start ‘Seeds Of The Desolate’ soon shakes from its slumber and bursts into life with the force of a volcanic eruption. Swinging with that tight-but-loose feel pioneered by Sabbath’s Bill Ward, it’s a huge pendulum that’s inching towards your neck, and its hypnotic rhythm will hold you spellbound. The addition of some keyboards on ‘It Came Upon One Night’ adds another dimension to the bands sound and, an angry cloud hanging oppressively, makes for a dark and broody listen. Solitude Aeturnus’ influences, while still evident, are less pronounced, and this release finds them developing their own groove, with the introduction of more thrashy passages showing a maturity in their use of musical dynamics. The instrumental ‘Beyond…’ makes for a haunting closer with its ominous tolling bell, and it’s one that will chime long after the disc’s stopped spinning.

Throughout their career Solitude Aeturnus barely put a foot wrong, and they released a series of critically acclaimed albums, but it’s the first two that are considered the best. As with all Cherry Red releases, this set comes as lovely package with a booklet containing liner notes and rare pictures. So, if you are new to Solitude Aeturnus, or you want to give your vinyl records a decent retirement, this set is for you. 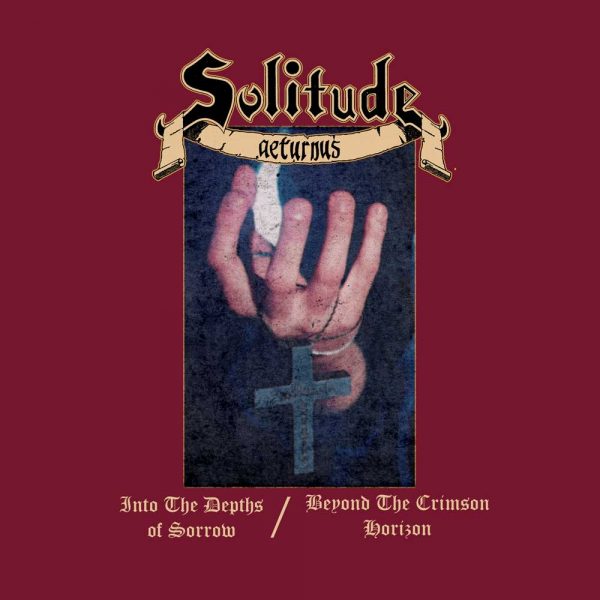