Wave your Hans in the air…

Paul Castles does his best to remain cheerful while listening to a funereal doom epic from Soldat Hans, released via Wolves And Vibrancy Records on March 30, 2018

There’s a lot of doom and gloom in the world, as a cursory glance at the news headlines confirms most nights. At times it can make for fairly depressing viewing. But if there’s room in your life for another layer of angst, torment and anguish then Es Taut, the sophomore album from Soldat Hans, will plug the void.

When these six Swiss instrumentalists began practicing their craft it was initially as a vocal free zone, although they quickly ceded to allow occasional, but significant, vocals to leave their mark. Having generated plenty of interest with full length debut album Dress Rehearsal (2014), their sound has been solidified and more finely sculpted on Es Taut.

Despite lasting close to an hour, only three songs make up this formidable release. This becomes less of a mystery when it becomes apparent that opening crushing composition ‘Story of the Flood’ almost stretches to 30 minutes on its own. But what a 30 minutes or so it is.

Without seeking a cheap pun at the expense of the song title, this really is draining stuff. An exhaustive lesson that veers close to the likes of Cult of Luna and Belgian miserablist maestros Amenra. The tempo – although even to use that word is in itself misleading – is so sonically slow to the point of being close to static. Of course at times through this pained plunge head-first into the very abyss of life occasional contours, ups and then eventually downs, are allowed to penetrate the otherwise bleak and barren wilderness.

When the vocals enter this somnambulant state they are so raw as to be undercooked, their savagery acting as a stark and frightening flip to the soft hue that has stretched seamlessly into the ether before the bile barks shatter the mood. Shimmering cosmic interludes offer welcome relief but even against the smooth silky sections the feeling of impending doom, confrontation and at times barbarism never sails too far from the surface. 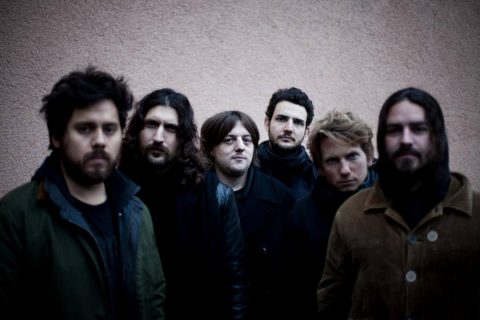 For those who survive the full torturous behemoth of the near biblical ‘Story of the Flood’ the second track ‘Schoner Zerbirst Part I’ almost sounds positively jolly, although even if the sound is bigger and bolder, and the overall feeling more connected, the underlying state upon closer inspection remains inherently overcast. The approach is much folkier, pagan almost, with the harmonized vocals syncing on an almost spiritual level. There’s an additional grandeur about the song, almost a flamboyance and an assertiveness not seen on the more introspective opener. Here the layers instantly feel more friendly, vibrant and virtuous.

‘Schoner Zerbirst’ is split in two with Part I lasting eight minutes and Part II 10 minutes longer and opening with some soft clean rhythms that float ambivalently in the style of 80s Scottish shoegaze innovators The Cocteau Twins. Again the mood hangs heavy, as the tempo slips down into a morose march in which every note is left suspended in the air until eventually blessed relief arrives in the form of another cushioned drum kick or sweep of the guitar.

After around seven minutes some clean harmonious vocals arrive, slightly ignominiously in light of what’s gone before on Es Taut, and an emerging psychedelic pattern elevates ‘Schoner Zerbirst Part II’ onto a higher, warmer, plain. Eventually the temperature drops and anything with a hint of warmth is swallowed whole by throat-shredding cries, demonstrative drums and apocalyptic rhythmic surges. The final stages burn with tangible ferocity, the shuddering fuzzed rhythmic attacks almost smashing down as though on an industrial anvil. The screeched vocals are almost fatalistic, as a cloak of destructive barbs envelopes the listener.

Soldat Hans’ compositions ask questions that are not easy to answer. The music is rich in texture while being occasionally daunting and demanding. It’s an intelligent listen, one worth returning to to explore the multitude of interconnecting sonic shades in more depth.