Teutonic thrashers Sodom make a stunning return to form via their new 3 track EP Partisan. After their foray into hardcore punk in the mid 1990s Sodom are firmly back in the thrash fold. Like all good music from that genre they’ve harnessed the energy of punk and welded it to dizzying metal musicianship and the result is something both fast and furious as evidenced by opener and title track ‘Partisan’. Kicking off with a killer riff and incessant drum beat, it’s immediately obvious Sodom haven’t come to take prisoners. Told from the perspective of a soldier with lyrics that evoke a blood-sodden battlefield, this is not music for the fainthearted. However it’s not all bludgeon as a slower mid-section accentuates the faster, heavier passages.

The band have opted for a lo-fi production which avoids the sterility of much modern metal and the result is an organic sound that captures the aggression of their early work. The drums roll behind the guitars over which ever present Tom Angelripper lays some fine throaty vocals and his rumbling bass enhances the rhythm section. Now in their 37th year, this EP is the sound of a band firing on all cylinders and it’s great to see time hasn’t blunted their rage.

Guitarist Frank Blackfire (who played with the band on their ground-breaking Agent Orange opus) is back and his playing on ‘Conflagration’ recalls the classic thrash sound found on Extreme Aggression and Reign in Blood. It’s a track which barely pauses for breath and is sure to set mosh pits alight on their forthcoming tour.

The EP closes with a live version of ‘Tired & Red’ (from the aforementioned Agent Orange) recorded at this year’s Rock Hard Festival. It was this line ups first outing and it evidences a real chemistry and the inclusion of ‘Tired & Red’ both tethers the band to the past and points to a bright future. 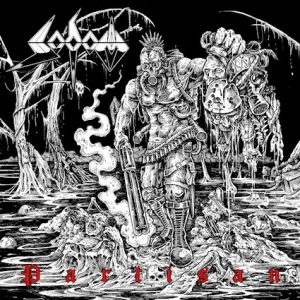