Paul Castles is transported to a better place by the latest suffocating slab from the Black Bow Records conveyor belt, Electric Breath by Belfast trio Slomatics, released on  2 September, 2016

Black Bow Records have been one of the most consistent producers of intelligent heavy-layered music over the past couple of years, and Future Echo Returns, by Belfast trio Slomatics, more than lives up to their high standards.

This is Slomatics’ third album, but the first on Black Bow, which does of course mean it’s been through the skilled hands of ace production guru Chris Fielding. Fielding, along with Black Bow boss Jon Davis, make up two thirds of Conan so provide a natural fit for the kind of downtuned monolithic symphonies shaped by Slomatics.

Indeed in Slomatics’ formative years they actually shared a split release with the then little known Conan, while Davis is not immune to joining Marty (drums/vocals/synths), Chris (guitar) and David (guitar) on stage when the like-minded crews share a bill. Although Slomatics have been a fixture of the Northern Ireland underground scene for more than 10 years, the band’s trajectory really started to significantly climb five years ago when Marty came on board.

Future Echo Returns commences with the instrumental ‘Estronomicon’ a drum driven opener that gradually winds up the tension and leads us almost seamlessly into ‘Electric Breath’. The first few chugs almost pass as an extension of ‘Estronomicon’ before Marty’s vocals are introduced, shaping the sound with imagination and authority. A thunderous rhythm, restrained in tempo but weightier than a bag of cement, is maintained before it dissipates into a blackened whirlpool of narcissist noise.

On ‘In The Grip Of Fausto’ the riffs carry more urgency , chased along by Marty’s barked vitriol and it’s only when the softer dissonant passages of ‘Ritual Beginnings’ arrive that Slomatics finally come up for air. The six-minute instrumental is though deceptive as it warms up better than baked beans in the microwave and by the time it reaches journey end it’s spitting more feathers than a duck sucking on a gobstopper. 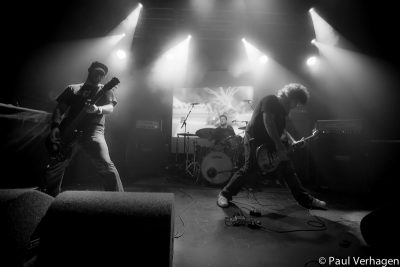 Slomatics’ anvil on stone approach to doom is magnificently defiant, full of rough ‘n’ ready edges. They don’t feel the need for a riff to outstay its welcome with numbers such as ‘Rat Chariot’ passing by in five minutes, comparatively fast work for a doom outfit. What Slomatics do well is make the most of what they do when they do it, by which I mean there are no wasted passages. It’s a full on powertrip with the Belfast bludgeoners attacking every riff and beat as though it’s the last.

‘Supernothing’ sees the trap door opened on another ungodly riff, one that sprouts more hairs than a coconut and is every bit as durable. At one point you almost have to shelter from the torturous drone omitted by Slomatics, a warning cry so low it can tie your shoelaces for you.

The longest track on the album is the commanding closer ‘Into The Eternal’ an atmospheric piece in which the first half see a shadowy choral flourish extinguished after a couple of minutes by a drawn out drawl. The vocals do kick in at the five-minute mark but the tempo doesn’t shift, the same slightly restless rhythm is maintained as fuzz levels escalate into a soaring sonic skin that winds itself around the supremely cultivated patterns before gradually squeezing the life out of it as Marty’s haunting vocals fill the room with tearful emotion. 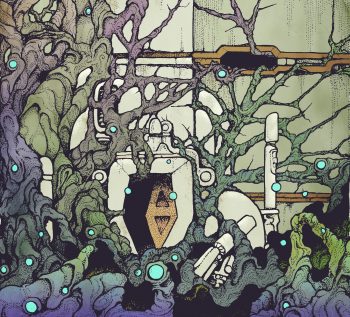