The late Slim Dusty was often referred to as “The Man Who Is Australia” and his unique take on country music helped to define a generation. Based in the Southern hemisphere his contribution to popular music is criminally overlooked and this superb DVD looks to set that right. Slim’s large personality overshadowed the contribution his wife (Joy McKean) played in turning him into a cultural icon and Slim & I puts their partnership in proper context.

You don’t have to be a Slim Dusty fan to enjoy this movie and it’s sure to have a crossover appeal and, very much like The Story Of Anvil, it’s impossible not to get swept up in the storyline. With its roots in Hillbilly (the precursor to rock n’ roll) there was a time when Slim’s sound was considered just as dangerous and rebellious and Slim & I frames his story within a wider social history. Using a mixture of original footage and re-enactments the 1940’s and 50’s looks like a whole different world. In many ways it was, yet the story is timeless; struggling musicians eking out a living on the road and playing in almost every nook and cranny of a vast continent. Pioneers in the truest sense they blazed a trail to every dusty, outback town and, rather surprisingly, found a receptive audience with the indigenous Aboriginal population.

Slim & I is a well paced film and slowly opens as if a lotus flower to reveal different facets to the story. A host of interviewees not only drive the story forward but explain what an impact Slim’s music had. When Slim finally got his big break it was with the novelty song ‘The Pubs With No Beer’. Like Bowie’s ‘The Laughing Gnome’ it became a millstone yet, aside from topping the Australian charts, it made him a household name in the UK. It’s hard to imagine why country music took off in the land of Oz but it’s popularity was undoubtedly due, in part, to Slim’s hard work (with ‘hard’ being the operative word). With a career spanning five decades he released a hefty 101 studio albums and with no decrease in quality.

A humble, no nonsense type of guy Slim Dusty is still loved in his native Australia but this film seems certain to raise his, and Joe’s, profile in the rest of the world. 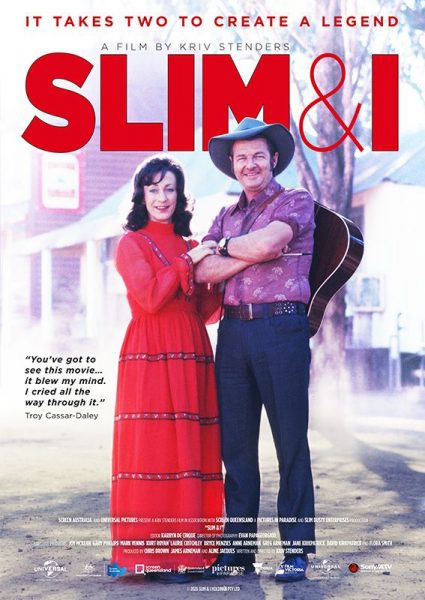