There is a New Jersey invasion over the coming weeks with Bon Jovi, minus still absent guitarist Richie Sambora, taking to the hallowed turf of Villa Park on 9 June when there will no doubt be much raising of hands and shooting through hearts. Those who prefer the grown up version don’t have long to wait as Bruce Springsteen & The E Street Band arrive at the Ricoh Arena on 20 June as the ‘Wrecking Ball’ tour returns to Europe.

Springsteen played two memorable shows at Villa Park back in the glorious summer of ’88 and I was fortunate enough to attend both nights, with an A level Maths exam sandwiched in-between. End result? One failed exam but two of the best shows I have ever seen; Springsteen never disappoints but following him around the UK on the ‘Tunnel of Love Express’ will always be a special memory. If only the t-shirt still fit… 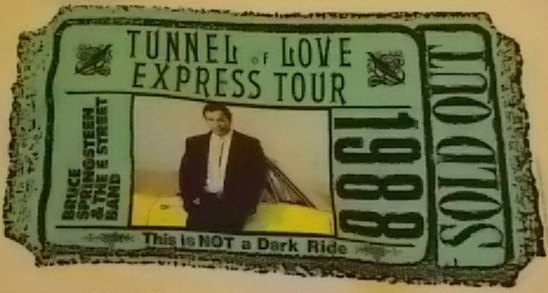 Villa Park has only been used sporadically as a concert venue since those Springsteen shows but just a couple of miles away in Erdington there was once a club that played host to more than 400 gigs during the short time it was open. Named for two consecutive years by Billboard magazine as the best rock venue in the world, Mothers club opened its doors on 9 August 1968. Situated along the High Street above a retail store it had previously been the Carlton Ballroom but with John Peel in situ as the resident DJ, Mothers was able to attract the likes of Led Zeppelin, Fleetwood Mac, Family, Black Sabbath, Deep Purple and Elton John. On 7 April 1969 Pink Floyd recorded their show at the club with the versions of ‘Astronomy Domine’ and ‘A Saucerful of Secrets’ appearing on Ummagumma. The club closed for business on 3 January 1971 and was for many years used as a storage room for the furniture outlet on the ground floor. The Birmingham Mail reported in 2012 that there were plans afoot, with the support of Steve Gibbons, to recognise the historic significance of the site with a blue plaque award, a one-off concert and for it to be put to future use as a museum of rock history. Time will tell if this ever materialises but the importance of Mothers should not be underestimated. Not only did it offer the big names of the day but many local artists also appeared here such as The Idle Race (featuring Jeff Lynne) and Steve Winwood with Traffic. For tragic reasons Mothers played a part in the history of folk legends Fairport Convention. Travelling back down the M1 after a gig at the club in May 1969 an accident claimed the life of teenage drummer Martin Lamble and the rest of the group were so traumatised it almost led to them disbanding. Thankfully, the young band regrouped to record the classic Liege & Lief, arguably their finest album.

Other legendary names to appear at Mothers were Rod Stewart and The Who, the latter with a complete performance of ‘Tommy’, and both will be hitting the LG Arena later this month. Rod has consecutive nights at the venue on the 19th and 20th and The Who bring their full production of ‘Quadrophenia’ on the 28th. Another 60’s veteran in the region is Neil Young who will be backed by Crazy Horse for his show at the LG on 11 June.

If arena gigs are no longer your thing then it is another busy month down at The Robin 2 in Bilston. Bringing on a little bit of heart and soul on 15 June will be T’Pau, still led by the flame haired and feisty Carol Decker, very much a pin-up girl for many of the Midlands Rocks editorial team back in the day.

We don’t usually see much of them outside of the festive season but Slade, led by local boys Don Powell and Dave Hill appear at the club the following week on the 21st. And a few days later on the 26th prog fans old and new will be descending on the black country as Peter Hammill and Van De Graaf Generator return with show that includes a updated performance of ‘A Plague of Lighthouse Keepers’ from 1972’s Pawn Hearts.

Another hometown gig takes place over in Stourbridge at the River Rooms when The Wonder Stuff are appearing at the club on 5 July; make sure you book as soon as possible if you want to be sure of getting a ticket for this one.

The big event over in the East Midlands this month is of course the three day festival at Donington (and no matter what anyone tries to call it, it will always be Donington). Amongst the veterans showing the young upstarts how it should be done over the course of the weekend will be Uriah Heep, UFO, Motorhead and headliners Iron Maiden with their retrospective ‘Maiden England’ show. Let’s hope the weather is kind as we move into festival season and there is no repeat of the mudslides that almost stopped the event in its tracks last year. That’s all for this month and when the column returns in July we will be taking a look back at the sights, sounds and smells that came from Edwards No. 8. Please do write in if you have any memories of what was one of the City’s leading rock venues for many years.