A long haul, but the journey is engrossing…

This a mammoth, 19 track, 2 CD, 109 minute affair in which the performance levels never drop below eleven, covering Saul (Slash) Hudson’s career from G’n’R, through Snakepit and Velvet Revolver to his more recent, satisfyingly fertile collaboration with Myles Kennedy. And fittingly, it is recorded at The Roxy venue in LA, where it all began, up close and personal, for Slash, Axl, Izzy et al.

When Hudson walked away from the G’n’R rock band wreckage, his choice of vocalists seemed to bear out Einstein’s definition of insanity… doing the same thing over and over again but expecting different results. You can only surmise that this experience led him from Slash’s Snakepit, through Velvet Revolver, eventually and exasperatedly to Slash (2010), and a different vocalist for each track. That would have worked if they’d written a bunch of decent songs. As it is, only ‘Ghost’, written with Ian (Cult) Astbury and the two collaborations with Myles Kennedy, ‘Back From Cali’ and ‘Starlight’ made it through Quality Control onto the band’s current setlist, and thus are featured here.

If it’s not already clear from Slash’s 3 “solo” albums, the punky rebelliousness that proved to be a vital element of GnR’s success has now gone, to be replaced with a much more old school heavy rock. That said, it usually presents fully formed, driven by an indestructible groove, propelled by a hard rock undertow that occasionally wells up like an oil fire. The second solo album, Apocalyptic Love, where past and present collided in a swirl of tough-as-teak guitars, great songwriting and blazing vocals, was the real breakthrough. Yet here, only ‘Halo’, a one-song, pumped up metalfest live; the howling, Cult meets Bowie romp, ‘You’re A Lie’, dripping with steam and sweat, and ‘Anastasia’ make it. The last track there sounds immense live… the opening guitar motif nods respectfully to the music’s classical origins, then they ditch the hard rock torch and light it up with a bewitching, unmannered restraint.

Elsewhere, the album is filled with massive slices of exuberant hard rock, with ‘Stoneblind’s shadowy Cultish undercurrent and ‘Bent To Fly’s swaying hypnotic groove emphasised by the unabashed brazen power of this band’s stage persona. Kennedy may be master of the beautifully enunciated spoken word, but he can mangle and strangle his vowels with the best of them, as illustrated on one of his best co-writes with Hudson, ‘Back from Cali’.

Naturally, the set is peppered with G’n’R highlights, songs that led to an unreasonable expectation that throughout his career, Hudson would continue to write songs of such impact. Judging by the crowd reaction, the current clutch of fans may regret the loss of the cultural zeitgeist that was held captive by G’n’R, but they have clearly more than happily settled for Hudson’s solid, riffy hard rock groove (with added percussive thump). At 109 minutes, Live At The Roxy is a long haul, but the journey is engrossing. 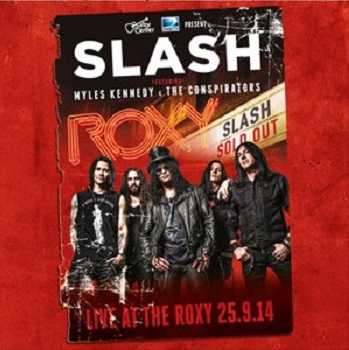