Wolverhampton’s Slade have had a 50-year career that’s seen numerous highs and lows, but one thing has always stayed constant: their amazing live show. Those lucky enough to have witnessed the band during their original tenure (1966-1992) will never forget their speaker-smokin’, mouth-foaming, throat-shreddin’ live assault. Four musicians who were born to entertain, Slade rarely left a crowd disappointed, and if proof were ever need, it’s here in this 5CD set, All The World Is A Stage. Containing two legendary albums (Slade Alive! and Slade On Stage) plus three previously unreleased sets, this compendium shows why, whether rocking 65,000 souls at Reading Festival or the close confines of The Hucknall Miners Club, Slade were an untouchable beast.

After two studio albums that found the band floundering for image and direction, Slade really hit their stride with the live album, Slade Alive! Recorded in 1971 in front of 300 rabid fans, and released the following year, it’s now considered a bona fide classic (and rightly so) and still sounds fresh and exciting five decades later. When this album dropped, Slade had shed the skinhead look in favour of the glam image for which they’d become famous, but one thing they carried over was the sense of aggro, and Slade Alive! seethes with danger. Containing four covers and three originals this disc opens with a rendition of Ten Years After’s ‘Hear Me Calling’ and things get rowdier from here on. Their own ‘In Like A Shot From My Gun’ follows, a track that was meant to be put down in the studio, but they could never recapture the magic of this version.

Throughout the gig the band constantly rile up the crowd (but it’s all in the right spirit) and Noddy Holder’s vocals had never sounded better, his raspy gymnastics on ‘Get Down And Get With It’ perfectly illustrate why his voice will forever be the sound of the seventies. ‘Born To Be Wild’ has been covered by a multitude of artists (The Cult, Lizzie Borden, Krokus) and to be honest they’re all pretty horrific, but Slade buck the trend, and turn it into an eight-minute monolith that’s laced with lots of lovely feedback. Slade Alive! was the album that changed the band’s fortunes and paved the way for them to become the biggest selling singles band of the seventies (with chart placings only rivalled by The Beatles). Slade Alive! casts a long shadow over popular music and influenced many imitators (Kiss named their Alive! album in honour of this record) but Slade Alive! remains the original…and the best.

By the time Slade On Stage was released in 1982, Slade had returned from a spell in the wilderness that was devoid of hits and saw their fanbase dwindle too almost nil. Blistering sets at 1980’s Reading Rock Festival (see Disc Three) and 1981’s Monsters Of Rock saw them return triumphantly, and with a newfound heavy metal audience. Subsequently, the band toned down their image; out went the mirrored hats and tartan flares and in came denim jeans and sunglasses (although outlandish guitarist Dave Hill kept his white platform boots). However, musically it was the same band and Slade On Stage found them delivering a set full of brimstone and fire. Like a demented vicar Noddy leads band and crowd through opener ‘Rock ‘N’ Roll Preacher’ and it seems the band had released an album that could rival Slade Alive!

Recorded in Newcastle in late ‘81, Slade On Stage benefits from featuring nine originals amongst its ten tracks, and they produced a record that’s a bare-knuckle boxer. ‘Lock Up Your Daughters’ perfectly encapsulates why Slade appealed to the denim and leather brigade and could hold its own with any of the new breed. An excitable ‘We’ll Bring The House Down’ can’t fail but to raise the roof, especially when a nifty bass solo from Jim Lea includes a few bars from ‘Purple Haze’ and ‘Spirit In The Sky’. The band hadn’t turned their backs on their past and ‘Gudbuy T’Jane’ and Mama Weer All Crazee Now’ (long the contention of many an English teacher) bring down the curtain in fine style. As if to highlight their new status Slade On Stage got glowing reviews in metal publications such as Kerrang! and Sounds, and who am I to argue?

By the late seventies Slade’s career was on the rocks. As the hits began to dry up, and their popularity decline, the band began to fizzle out. But then fate intervened. Ozzy Osbourne pulled out of the Reading Festival (at the time it was the premier metal fest), the promoters were looking for last minute replacements, and up stepped Slade. Guitarist Dave Hill was initially reluctant, but after some persuasion he agreed, and I bet he’s glad he did because Reading proved to be a rebirth. Not only did the band go down a storm, their set was recorded for Tommy Vance’s The Friday Rock Show which brought the band’s crazee sound to a whole new audience. This set has been floating around in bootleg form for many years, but it finally gets an official release as Alive! At Reading to show why Slade were such a hot ticket.

This disc gets straight down to business with ‘Take Me Bak ‘Ome’, and it rarely looks back over 40 blistering minutes. This disc excludes a few tracks from that day, but no fear; the crowd welcome the band like returning heroes, and if they were ever in doubt as to how much they were loved, the reception they received on 24th August 1980 set them right. You can almost feel the waves of affection that radiate between crowd and stage, and it spurs the band on to ever greater levels of insanity. The band unleash a “greatest hits” set, and you have to admire their chutzpah in having the assembled throng sing along to ‘Merry Xmas Everybody’ on a warm summers evening! Three of these tracks were previously released as the Alive At Reading EP, but here’s the wonderful resurrection of Slade, with warts n’ all!

Less than four months after their jubilant return, Slade found themselves in Nottingham on 10th December, a night that’s now been immortalised on Live At The Hucknall Miners Welfare Club. One thing is immediately obvious, and that’s playing to a festival, or club crowd, Slade never give less than 100 per cent. This disc presents the band’s full set, and it is a joy to hear the set ebb and flow over 70 minutes, as slower tunes sit next to rockers, and new cuts nestle next to old favourites. The longer running time mean we also get Noddy’s stage raps in full (often edited out because of time constraints on vinyl albums). His bawdy bar-room banter is the perfect sauce for a rowdy rock n’ roll gig, and it adds another layer of excitement to an already passionate evening.

From the opening notes of ‘Dizzy Mamma’ to the closing bars of ‘Born To Be Wild’, Slade deliver a masterclass in stagecraft. In between we get the double entendre laden ‘Night Starvation’, the ode to hooliganism ‘When I’m Dancin’ I Ain’t Fightin’’, while the band revisit some roots on high-octane versions of rock n’ roll classics ‘Somethin’ Else’ and ‘Pistol Packin’ Mama’. The boots marching on ‘Get Down And Get With It’ sound like an invading army and, this being December, ‘Merry Xmas Everybody’ only heightens the party atmosphere. Two more classic covers precede the curtain call; the more Chuck Berry than Chuck Berry ‘I’m A Rocker’ which abruptly segues in Steppenwolf’s ‘Born To Be Wild’, and live albums rarely come as vital, or vivacious, than this.

What I like most about All The World’s A Stage is the variety of tracks. I’ve heard similar collections where you get the same songs five times, and while there’s a few obvious repetitions, on the whole this is a wide and deep selection. It’s a few of those deep cuts which open Live At The New Victoria, namely ‘Them Kinda Monkeys Can’t Swing’ and ‘The Bangin’ Man’. Unfortunately, the booklet offers no clues as to when this set was recorded but judging by the stage raps it originates from April/May 1975, and finds the band on the cusp of a wave, before their career crashed dramatically. It’s a typically rowdy Slade show with the plaintive ‘Everyday’ holding hands with the scarf waving ‘OK Yesterday Was Yesterday’. It sounds as if the band are playing to teenyboppers and council bigwigs, but it only goes to prove that whoever’s in the crowd, Slade will dish out the good stuff.

Charting Slade’s rise and fall (and rise), All The World Is A Stage is a look at one of the UK’s most beloved and enduring bands. Featuring live recordings captured over the course of a tumultuous decade, it finds Slade in their natural habitat, and doing what they do best. Their legacy still reverberates today in any band who believes in putting on an exciting live show, and All The World Is A Stage proves that when it comes to rocking venues, large or small, Slade will always be the ringmasters. 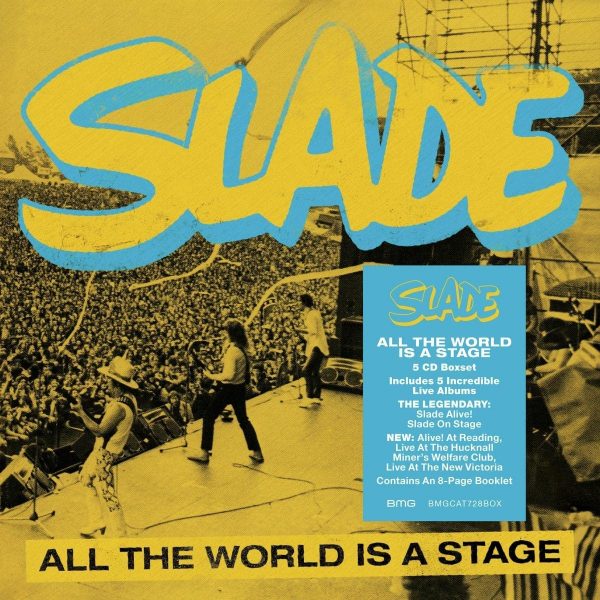