Skindred are 5 albums deep into their back catalogue already, and the advent of Volume will make them 6-strong. Whilst they now have a solid arsenal of material, their sound has never really deviated from that of their humble beginnings. It may have gained a layer or two of depth, but it still has the same utterly genre defying foundations; foundations of a sound that has never been accomplished by any other artist, and Volume is exemplary of just why that is.

It all kicks off with “Under Attack”, the first song premiered from the album back in August. It has that signature Reggae, Metal, Hip-Hop sound (yes, those three genres can be combined to great effect) and it’s full of those Skindred riffs that just make you want to bounce until your legs collapse. Benji Webbe turns things up a notch at the song’s climax, too, ranting and rapping at full, difficult-to-understand pace as only he does. Given that the Welsh-Jamaican fires a fair amount of Patois into his verses doesn’t help, either. They then charge through title track “Volume”, which is equally as ferocious and frenetic, and also shows us that Benji’s voice goes pretty damn high. Its then onto “Hit The Ground” and “Shut Ya Mouth”, which head straight on the offensive. After listening to that, I’d take their advice and stay out of their way. Being on Skindred’s bad side definitely doesn’t sound too appealing.

Volume is made up of 14 songs, of which, 3 are nice, welcome interludes. They provide a little bit of time to gather your thoughts and to compose yourself, before you’re launched right back into a melee of punchy riffs and quick-fire low-growled raps – not to mention their trademark skyscraper, pull-you-in choruses. A personal highlight of the album for me comes at the end of “The Healing” when a snippet of cliché drum and bass sounds, proceeded by a sample of Delia Smith’s infamous “WHERE ARE YOU?!” half time Norwich City FC pep talk. Pure genius.

Aside from the aforementioned interludes, “Saying It Now” is the only point of the record that we’re treated to a bit of a ‘slow song’, if you can call it that. As gnarly as the heavier tracks are, it offers a refreshing twist to the album: a common theme on the majority of their prior releases, too. It is also impossible when talking about this album not to mention the brilliant “No Justice”. It centers around the brilliant, all-together play on words of “ain’t no justice, there’s only just us” and is just cracking fun to listen to. The same can be said for the entire album, and for Skindred themselves for that matter.

So, yeah, Volume is yet another corker of an album and as always, a shit load of fun. The latter is reason enough to listen to it on repeat anyway, isn’t it? That’s what we suggest you do, at least. Skindred may now be 6 albums and 17 years into their career, but they are by no means showing any signs of slowing down. 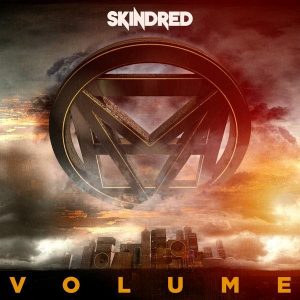