a thrilling musical celebration of past musical heroes

With Motley Crue calling it quits and Guns N’ Roses tour obligations winding down there’s room to awaken Sixx: AM out of its hibernative state once again. The band’s debut album, entitled The Heroin Diaries, was meant as a soundtrack for Nikki Sixx’s eponymous book and it caused quite a stir when it was released. Sixx: AM’s second album was also a resounding success. Now, four years later down the road, Sixx and Co are ready to release their third full length effort, called Modern Vintage.

Although a certain kind of darkness still permeates throughout the material Modern Vintage isn’t such dark and depressing affair as The Heroin Diaries tended to be at times. Inspired by the likes of Elton John, ELO, David Bowie and Queen the new new album is a very vibrant and diverse body of work, yet with a very mature and cohesive feel. Tracks like “Stars”, “Gimme A Love” and “Let’s Go” are more uptempo rockers very much of what you can from expect from Sixx: AM, but it’s the off-beat nature of “Gotta Get It Right” and the almost funk/discotheque feel of “Miracle” that gives Modern Vintage its distinct feel and persona.

Another excellent example of the band’s fearless attitude towards experimentation is their reworked version of “Drive”, the famous song by Cars. The main melody line is still recognisable but it’s the almost trip hop-like arrangement which makes it all float. The swing/big band feel of “Before It’s Over” is also a great representation of what Modern Vintage is all about.

DJ Ashba’s playful yet meticulous guitarwork and Sixx’s spot on bass lines tie the whole project together, but it’s James Michael who steals the show with his versatile vocal lines. He’s subtle when he needs to be, yet belts it out with the best of them. He’s really one of rock’s unsung heroes and very much in the same league as Chris Cornell, Freddie Mercury and David Bowie as far singing prowess goes.

A musical eclectic taste is required to really appreciate this album and it’s poppy leanings, while the very polished sound may be a turn off for people who like their music raw and rougher round the edges. Having that said, Modern Vintage is a very enjoyable album to listen to and it’s a thrilling musical celebration of past musical heroes delivered with a contemporary edge. All in all, a very welcome return to form from Nikki Sixx and his musical partners in crime. 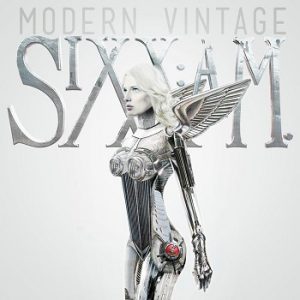