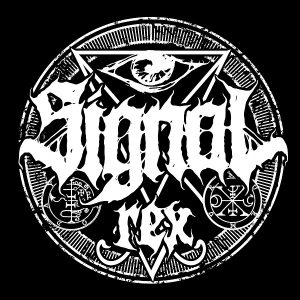 After the obligatory chilling atmospheric two-minute intro ‘Entrada’ to open their debut full length, Chile’s Invehertex lets loose with the first of two twenty-minutes-plus tracks, ‘Aurora Magna’. All-consuming and blackly devouring, it’s a beast of blackened atmospherics, raging riffs, vocals born of hellfire, extended passages of grim glory and lacerating textures, Invehertex’s opening salvo is a mightily impressive one. Alternating between ambient tracks that bring together menacing whispers with ominous and heavy textures and full-on barrages of blackened occult barbarity infused with a cold, clawing and raw primitiveness, Hacia el Vórtice, at around the 80-minute mark, is an outstanding piece of work. Their craft sharply honed, this is an album that rarely if ever falters. That it usually takes bands two or so albums to get where Invehertex are already, that this is the band’s debut is stunning.

A limited vinyl LP and cassette pressing will follow on Signal Rex later this year.

Limited to 250 copies, this two-track EP form Portugal’s Enlighten is constructed of discordant riffs and twisted atmospherics that though good, somehow fail to achieve what the band intends. The opening to ‘Shroud of Ash’ drags and plods too prosaically to grab the attention and when the track eventually picks up and the black begins to flow, it’s more laboured than lacerating. The same goes for ‘Pallor’, the duo somehow keeping in check what should be raging. The musicianship is very good, the bass work in the opening section of ‘Pallor’ being particularly captivating, and they can structure a track that burns as brightly as the melancholic air rendered in the atmospheric tension, but the drive and the force that should be underpinning them is lacking. While not the most memorable of experiences, Illvmantithesis suggests that there’s better to come from this duo, and that it’s worth waiting for.