To describe Shrine of Insanabalis as an underground band is perhaps understating things. Let’s get this straight: If you started digging a hole in the back garden soon after breakfast and continued until the sun had almost disappeared for the day, your earthy endeavours still wouldn’t be anywhere near deep enough to reach these blackened barbarians. Disciples of the Void is so dark, both in heart and spirit, that it makes King Alfred’s cakes appear just a little golden around the edges. And don’t expect to be fed any juicy titbits from the cover art. Behind the chandeliers it’s just possible to make out a figure or two lurking in the shadows but either these fellas suffer from a severe case of agoraphobia or they don’t want their mum to know what they get up to in their spare time.

In fact the combined detective powers of Miss Marple and Hercule Poirot are really required to unearth a little more about this bunch. Probably German, this is their first album but with a profile lower than an inmate on the run from Wormwood Scrubs, we’re essentially paddling in the dark. Which I guess is exactly how they like it. Putting the who and wheres to one side, what is clear is that Shrine of Insanabalis have crafted a very impressive album indeed in Disciples of the Void. It has the power and penetration of much of the original blackened metal tablets carved by their ancestral Norwegian cousins. Think Darkthrone and Mayhem and you’ll be in the right zone if not actually at the right station.

The first feral explosion ‘End All’ is 58 seconds of insane blastbeats and blinding guitar thrusts that are so sharp they threaten to take your eye out. This is followed by ‘Ruina’ in which the full Shrine of Insanabalis war chest is cracked open to devastating effect. Completely warped vocal barks are joined by pummelling percussion and searing guitar lines that all come together to create a canvas of horror and desolation. By the time we get to ‘Acausal Paths’ we’re slowly getting sucked into this murky and miserable place. Slightly less caustic, with the tempo slowed just a fraction, it’s a tortured and twisted attack on your senses, ranging from mid tempo pummelling to violent and visceral attacks. The diverse layers are somehow interlocked so that attention levels are never allowed to drop, with a haunting overlaid riff holding their various plates in place, although the final stages erupt like Vesuvius with angry sparks leaping around in all directions.

As song titles go ‘(………..)’ takes some beating, but essentially this is 60 seconds of obscure satanic ramblings echoing over a gentle keyboard accompaniment. The furnace is back up to max with the following ‘Invocation’ another titanic tirade of machinegun blastbeats, crashing chords and savage cries that twist and turn down various cul de sacs without ever quite losing sense of where they’re heading. At almost 10 minutes, ‘Still of this Earth’ is a grinding mid tempo walk through the dank corridors of doom. A haunting intro pounds slowly away, dragging you headfirst into what eventually transpires is a hellish concoction of feverish attacks that are about as easy to stop in their tracks as a tidal wave. Levels of ferocity ebb and flow as the vitriol builds against a teutonic terrain of brutal riffs. A sat nav may help you navigate your way through this labyrinth of decay and devastation although it’s probably best to simply find your own route.

There’s not really a weak track here. ‘Cycles And Circles’ is another incendiary highlight, snarling guttural barks striding purposefully forward supported by a combination of incessant skin pummelling and rabid rhythms. Solemn closer ‘Omega’ almost acts as a climactic calmer, a soothing softly applied ointment to help heal the wounds inflicted by this most merciless of releases. 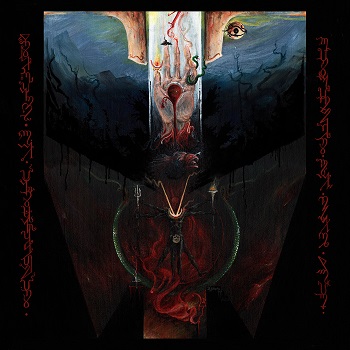