Despite its beginnings as a genre that eschewed any form of codification, hardcore punk soon became regimented and constrained by self-imposed boundaries. Enter New York trio Show Me The Body, a caustic collective who’ve come to smash those borders with a ten-ton hammer. Their aptly-titled third album, Trouble The Water, finds them creating waves that will reverberate through the whole scene and set the standards for others to follow.

That Trouble The Water is not going to be an ordinary outing should become immediately obvious with opening track ‘Loose Talk’. With Julian Cashwan Pratt’s vocals floating atop a banjo motif, it’s a rather ominous beginning that’s made starker by its stripped back aesthetic. However, when bassist Harlan Steed and drummer Jackie McDermott kick in, it becomes a street brawler which throws its weight around with reckless abandon. That confrontational stance carries over onto next cut, ‘Food From Plate’ which finds Pratt’s vocals right in your face and spat with venom, so much so that you can almost feel the spittle peppering your visage.

There’s a sharp angular feel to the songs which comprise Trouble The Water. Tracks such as ‘War Not Beef’ sound like they have been deconstructed and then reassembled in a new form, not unlike pieces of cubist art. Often the instruments will lock in tightly to create blocks which are stacked upon each other to create walls which entomb the listener. It is the complete antithesis of easy listening, and its unusual time signatures and unorthodox rhythms demand your full attention. Incorporating elements of sludge metal and noise rock, Trouble The Water is often discordant and discombobulating, yet it’s infinitely interesting and will keep you hooked from first note to the last.

Recorded at CORPUS studio, Long Island, and produced by Arthur Rizk, (Power Trip, Turnstile) Trouble The Water benefits from an expansive production, and it ensures that this album will reward repeat plays as subtle nuances buried in the mix slowly reveal themselves on successive spins. ‘WW4’ plays with the listeners expectations, and its understated origins ensures that when the band finally kick in, they kick in hard. The title track makes for a ferocious closer and the barrage of power chords, pounding drums and throat-shredding vocals makes the silence which follows positively deafening.

The band I’d most closely align Show Me The Body with is Chicago’s Shellac. Just like that combo, Show Me The Body construct huge sonic temples from minimalist beginnings, and Trouble The Water is calling you to worship. 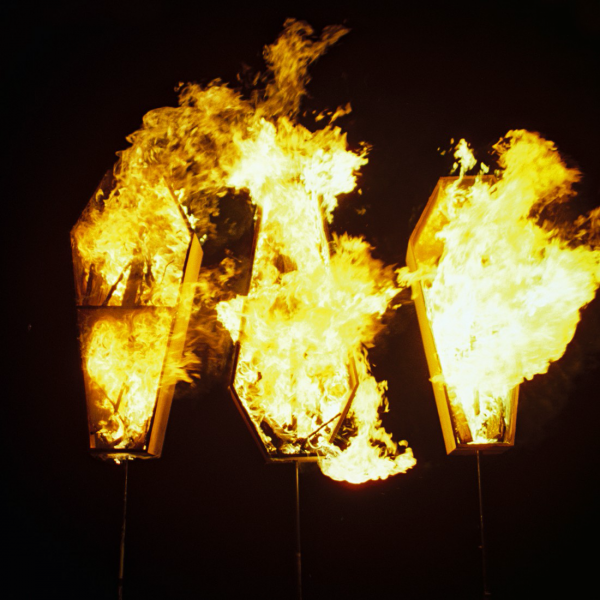