Watched the above video? Good huh! It pretty much sums up what you get with ‘Bury The Hatchet’ – facial hair, baseball caps, Zep t-shirts, amplifier hum, distortion, cool bluesy slide and the desert. If you liked it then Shotgun Sawyer could be the band for you.

SS are a Californian power trio and ‘Bury The Hatchet’ is their sophomore album. Recorded absolutely live on analogue equipment with not an overdub in sight, it’s a brain roasting smorgasbord of full on stoner blues, and neither stoner nor blues are overlooked – it’s a perfect blend, genuinely bluesy with maximum fuzz applied.

Yes, there are lots of influences (some of whom will be mentioned here) but they never swamp the music. They inform it, give it colour, texture. Heroes are nodded to but never ripped off, they all end up in this 9 track power drive of very heavy blues…man.

So, yeah, lots of that stuff. Resolutely lo-fi. You feel like you’re in the room with them, turning up the amps, joining in with the between song horse play. The crackle and hum of overloaded amps is ever present. It’s raw and loose, very loose, telepathically loose, the kind of loose that only power trios seem able to achieve. Songs mellow out into groovy, Dead-esque noodles before taking off into fuzzed out solos. Shotgun Sawyer jam effortlessly, songs drop out into just a lone bass…or drums…or drums and bass. You get the idea.

But the riffs always come back. Big riffs, bluesy riffs, doomy riffs – quite often all in the same song. ‘Take You Home’ has hints of Clutch in its mutated, bluesy ‘Whole Lotta Love’ riff, while ‘Hombre’ gives us a Tex-Mex Western rock-o-rama – it’s Bukowski in a Stetson set to fucked up ZZ Top riffage. ‘Love You Right’ is Doom blues a la Kyuss, laced with serious psyche crunch.

There are several stand outs. ‘When The Sun Breaks’ starts with a dirty Zep riff before chilling out into a grungy slow blues, it’s ‘Tea For One’ played by Soundgarden. ‘Backwoods Bear’, meanwhile, is a grubby acoustic blues stomp. ‘Shallow Grave’ closes the album and brings the heavy. It’s a drug fried Elmore James – raw, vicious and uber cool. Its brute distortion takes us from a wail of slide into the albums heaviest riffage…mammoth lumbering brutes of things, levelling mountains, bouncing off the studio walls.

‘Bury The Hatchet’ will definitely be on my ‘albums of the year’ list. Like Motorhead playing Howlin’ Wolf, it’s a thing of thuggish glory. Held together with feedback, it’s heavy fucking trippy Americana. Shotgun Sawyer sound like they were made to play together, possessed of a rare musical alchemy, from fuzzed to the max powerchords to far out desert jams, this flows like liquid mercury, and, in case I haven’t mentioned, it’s heavy. Proper heavy. Hendrix heavy. Sabbath heavy. Nuff said.

Released on 19 April via Ripple Music 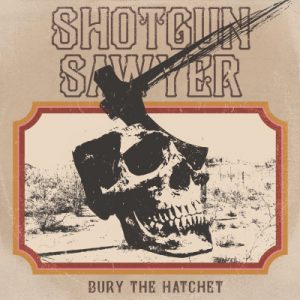