Due to the challenging nature of the music contained in ‘Disco Erosion’ by Shatner’s Bassoon, our reviewer felt that the traditional album review format would be, in his words, “as wrong as all fuck”. Therefore, he suggested that, in the spirit of the entirely improvised, experimental free jazz on offer in this release, his “review” would consist simply of his first impression notes, written while listening to the album – unplanned, unrefined, one take and of the moment. So here they are as we received them – hand scrawled, barely legible, wrapped around a rock and hurled through a window at Midlands Rocks Towers.

Here goes, track one. Squonky sax and keys – vaguely duck like and very jazz. They all sound like they’re playing different tunes. Fender Rhodes that recalls Miles (well, Chick Corea) at his experimental, take no quarter 70’s peak. Cohesion arrives briefly for a few seconds at a time and is then detonated. It makes you anxious – a panic attack set to music. Out there Coltraneisms. Bizarro awkward riff things that make you twitch nervously. Crashes to a spindly finish of sorts. Ooh, mellow ‘In A Silent Way’ intro. Theremin. Drumming makes Moon’s frantic journeys around his kit sound medicated. Aaaaand the weirdness returns. The urge to don a turtleneck and say “niiiiice” is almost overwhelming. Cowbell! Huge ships horn blasts of sax – we’re at the jazz docks daddio! Frequented by a myriad Tom Waits inspired freaks, geeks and deviants. Before you can latch onto a rhythm it’s bloody gone. Church organ – no idea which hellish church it belongs to. Dark, quirky yet playful – a child’s game gone badly wrong.

Jesus, I need a breather. Coffee!

‘Zuppa’. An almost funk-like underlying groove. Five electric instruments suffering a collective mass breakdown. Strange electronic rumblings. A “tune” bubbles up like an unwelcome fart. That almost Zappa namecheck…deliberate? If you’ve listened to his recent ’73 Roxy boxset you might be forgiven for thinking so. Track 4, more of the same. Mangled time signatures, all trying to out-weird each other. Sounds as though LS (Lalo Schifrin – ed) had a brain aneurism midway through composing the ‘Dirty Harry’ soundtrack. Peaks and troughs of noise. You kind of get used to this, in a Stockholm Syndrome kinda way. Howls and clatters its way to a fucked up Who-like powerchord clonk finish…if the Who came from an unhinged parallel universe. The band pummel as one pulsing, unidentifiable unit. William Burrough’s house band. Finally drifts off on a breeze. Kin ‘ell.

Summing up: Is it rock? No. Does it want to be? No. Does it care? No. Will work better live. And pissed. Who listens to recorded free jazz? It’s a shared/communal thing. If Mr.Bungle and The Cardiacs are too conventional for you. Overly quirky. Worth a listen if pre-warned and in the mood though. Would deffo catch them live. Short doses recommended. But enough for now. E-fucking-nuff. 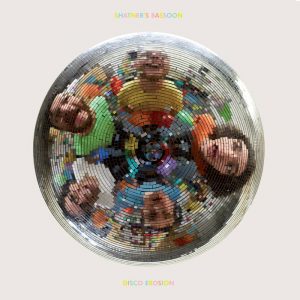