Myke Gray is best known for his career with rock band Skin during the 1990’s (they reformed briefly between 2009-2013) as well as Jagged Edge and Red, White & Blues. Following periods both in and out of the music industry (he is also a fully qualified personal trainer) Gray returned with his first solo album in 2017 titled Shades Of Gray. An almost fully instrumental album (‘Take Me Home’ showcased Kim Jennett on vocals) which proved that he could go up against the Vai’s and Satriani’s of the world with his blisteringly unique guitar style. The follow up finds Shades of Gray THE BAND take to the arena… or does it? Shades Of Gray are, despite how it may look on the CD cover, Myke Gray on everything but drums which co-producer Pete Newdeck handles. With a little help from a few friends on backing vocals he manages to create a big glam/hair metal sound right from Shade Of Gray‘s opening salvo. Mainly recorded during lockdown, funded by a loyal group of fans (all named inside of the cover) and despite some manufacturing hiccups along the way 2021 has finally arrived.

Def Leppard fans eat your hearts out as ‘Turn It Up Louder’ smashes through your speakers craving the return of live gigs with riffs that bring to mind Randy era Ozzy. Big drums, big bass and bigger guitar for ‘This Is How We Rock And Roll’ telling the story of the young Gray living out his dreams and aspirations on this full throttle rock blast. Good time partying is the order of the day on ‘I Get Up’ with it’s much more Sunset Strip vibe sparking memories of Poison in full ‘Unskinny Bop’ mode as Myke Gray shouts out his mantra of “When I’m down, I get back up!”. ‘Are You Ready For Love’ is a more straight ahead melodic rock song but is still underpinned by a mega riff and big choruses. Newdeck pounds out a red Indian war cry drum beat under ‘Shout’ before we are heading back to the 70’s for ‘Wham Bam’ which is all Glam! With a capital G. Any fan of the era’s pop rock bands will be totally transported to those nights in front of the TV waiting for Top Of The Pops to arrive. “Wham Bam!… Thank You Man”. ‘Tied Up In Love’ takes you to a heavier shade of Gray with massive solos scattered throughout these tales of S&M (or am I totally missing the lyrical point?). Myke Gray is never frightened to share his passion and ‘Music Is My Remedy’ is him doing just that and contains a chorus that should be heard in stadiums across the globe. Back in the 80’s and early 90’s every track here would have been all over MTV and the bands theme tune is no exception. ‘Take Me Higher’s “There is nothing black or white, only Shades of Gray” line is an absolute call to arms for the fans. Keeping the Leppard references coming ‘California’ is Shade Of Gray’s ‘Hello America’ with it’s request to “Take me to California” and doff of the cap to “Red, White & Blues” which closes out the album on Hollywood and Vine. With all it’s 70’s/80’s/90’s references this pulls together all of those influences but with a totally 2021 production. The expression “all killer, no filler” is very over used but this is very much the story here.

With an initial run of just 1000 hand numbered and signed copies I am very confident that Myke Gray will very soon be on the phone to order a second run of this release. I often feel that music should create an emotional response and the response to this album is total joy. If, like me, you discovered music with bands like Slade and T.Rex and developed your taste during the NWOBHM you are sure to love everything here. Enjoy!

1.Turn It Up Louder

2.This Is How We Rock And Roll

4.Are You Ready For Love

7.Tied Up In Love

8.Music Is My Remedy 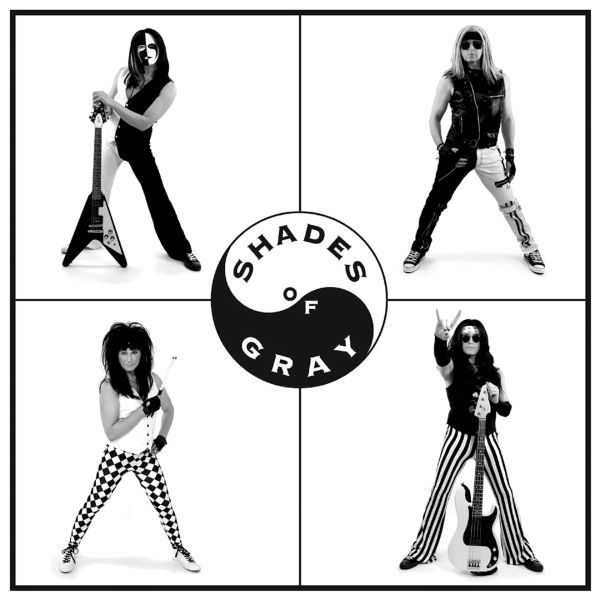