They mean it maaaaan….

Released on 1 December 2017 by USM/UMC and reviewed by Gary “ever get the feeling you’ve been cheated?” Cordwell

1976. Not the cheeriest, most optimistic of times. Miner’s strikes, three day weeks, skyrocketing unemployment and inflation, rubbish piling up in the streets, bodies left unburied, powers cuts, the government being held to ransom by the unions, bad fashions and Jimmy Saville. And that’s not even mentioning the charts – Leo Sayer, Renee and Renato, The Wombles, Abba, The Goodies, The Osmonds, David Soul, Demis Roussos, The Bay City Rollers and Showaddyfuckingwaddy. Seriously, something had to give.

And it did. Courtesy of four oiks from West London whose one and only album rebooted and retooled rock music, fashion and essentially the entire music biz for the decades to come. And here we are in 2017 and the aforementioned album, the seminal ‘Never Mind The Bollocks’, is celebrating it’s 40th anniversary with this lavish new box set.

So, the core of what we get here is the now deleted 3CD 2012 deluxe reissue plus a hardback book and live DVD containing, amongst other delights, footage of the notorious River Thames boat trip. The rarities disc contains an audio evolution of the album. The Dave Goodman demos are raw and basic, the songs not yet fully formed or realised, scratchy and somewhat thin. The Chris Thomas demos, however, are a different story, the band had found their man. Thomas clearly had a vision and a plan. He knew he had a good thing and was beginning to mold the nascent talent he had at hand and give them the studio sheen and muscle that would launch them into infamy. He’s the fifth Pistol, his contribution as vital as George Martin’s to the Beatles.

The live disc contains shows from Norway and Sweden. Matlock had been ousted and replaced by Vicious and Jones had clearly turned off his amps. Both of these gigs have long been available as bootlegs and unfortunately not much has been done here to improve their quality. The playing is raw and inexperienced but who gives a fuck, it wasn’t about virtuosity, it was about attitude and that’s here in spades. You wanna do this? Ok, get off your arse and form your own band.

And so we come to the album itself. A masterpiece. Perhaps the most thrilling, visceral, savage, joyous and foul-mouthed 40 minutes of recorded music ever committed to tape. It wasn’t punk, it was pure, undiluted rock ‘n roll. That precious commodity that had at that time been lost, misplaced by the lumbering, stadium filling behemoths of the day. The Pistols stripped it back to its raw essence, returning it to ground zero and detonating it afresh. Nothing was the same after it landed. Matlock and Cook were a rock steady rhythm section while Jones’ multi tracked wall of Chuck Berry/ glam rock mega riffs were a brutal force of nature. But it was Rotten who made it revolutionary – angry, disillusioned, confrontational and sharper than a Stanley knife – his anti singing and dead eyed stare gave a generation it’s voice, a sense of hope and purpose. He opened the floodgates – fashion, literature, graphic design – all dragged along and inspired in its snarling wake.

This really is a no-brainer. Don’t own this album? Buy it. Got it already? Buy it again, it’s pretty much the best album ever made, you can’t have too many copies of it. Don’t want it? Fuck you, it’s the Pistols. 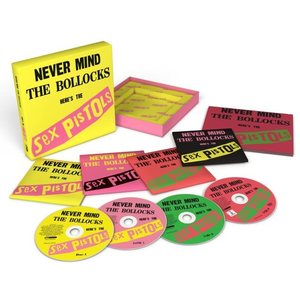 Disc 3 – Live In Norway and Sweden