American/German melodic metallers Serious Black could be construed as something of a supergroup featuring, as they do, members of Emergency Gate and Edenbridge. Yet the sound attained on their fourth studio album Suite 226 finds this quartet heading in a distinctly power metal direction occupied by the likes of Helloween and Queensryche.

I always find supergroups a curious beast: you’d expect the assembled musicians, given their pedigree, to effortlessly alchemise classic songs. Unfortunately it doesn’t always work out that way but there’s no fear with Serious Black whose chemistry is bubbling nicely while the recent addition of drummer Ramy Ali has only added to the fizz. ‘Let It Go’ opens like the heavens with a nice chugging riff and a sound that’s not quite thrash, but it’s certainly knocking on the door. Capturing the excitement of the early ‘80s when bands like Anvil and Grave Digger were forging new territory and melding it to the grandiose production is always gonna be a winner and Serious Black make it pay in spades. Lead single ‘When The Stars Are Right’ is a groove laden affair with vocalist Urban Breed utilising his full range and bringing to mind the pitch of King Diamond. Studio wizardry adds another dimension to the track, but not to the point of distraction, and here Ramy’s busy but understated style come to the fore.

Fans of concept albums will revel in Suite 226 as the songs are connected thematically by the tale of a man who, when incarcerated, becomes delusional. The spooky carnival music of ‘Solitude Etude’ mirrors the protagonists descent into mental despair while the lyrics of the distinctly AOR ‘Future Of All Humanity’ details his grandiose belief that the fate of the world rests in his hands but if that all sounds a bit too dark the songs chorus is so buoyant and arresting, it should be illegal. Like a magic carpet ride over desert plains the eastern flavoured ‘Castiel’ soars and the bright and shiny guitar lines entwine the vocals. Another powerful, chugging riff ensures the succinct ‘Heaven Shall Burn’ careers like a runaway train as the catchy refrain tries to apply the breaks. ‘Way Back Home’ is drenched in haunting guitar lines before ‘We Still Stand Tall’, heavy on the synths and pounding drums, rocks like latter day Maiden.

The obligatory power ballad ‘Come Home’ is the penultimate track and, in terms of the story arc, it’s perfectly placed but in terms of an album I feel it would have been better inserted earlier in the set to provide some respite amongst the more rockier numbers. Title track and album closer ‘Suite 226’ finds Serious Black in shapeshifting mode. An almost nine minute musical workout it finds the band alternating between loud and quiet passages before an ambient mid-section is curtly curtailed by a crashing guitar as the track proceeds to stomp towards a cataclysmic conclusion that finds our protagonist breaking out of the institution but offers little redemption for the listener.

After the mixed reception afforded to their last album (2017s Magic) Serious Black took an 18-month hiatus, time spent regrouping and working on new material. It was time well utilised as their latest (and fourth) album Suite 226 is a return to form and the story that threads the album together ensures it hangs together as a cohesive whole. 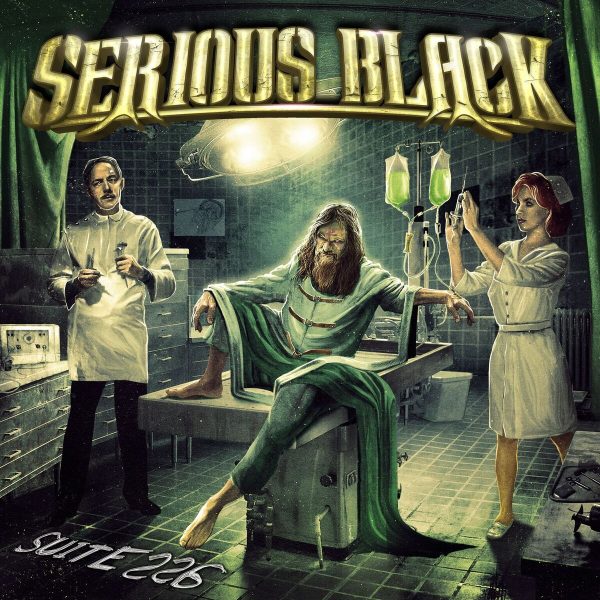