Paul ‘duck and cover’ Castles gets caught in the crossfire of the debut album from bludgeoning New York trio Seputus, released via PRC Records on October 21 2016

Seputus may be a new band to many although in their original form they were around for a few years after emerging in 2005. The figurehead was Steve Schwegler and he decided to revive the project a couple of years ago while still serving with the US military. He actually laid down most of the foundations of Two Great Pale Zeroes while still in the military and was able to release this album upon his own release having recruited fellow members of New York band Pyrrhon to breathe new life into Seputus.

Whereas originally a fairly straight-edged US death metal outfit, this second coming of Seputus has seen the band spread their tentacles further, with their sound now plunging deeper and darker areas. 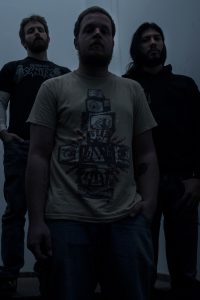 Schwegler takes credit for the guitars, programming and drums while the growling vocals come via the spittle-filled trap of Doug Moore, bassist Erik Malave completing the line-up with his sustained deep four-string cuts.

What hits you with the first couple of tracks is the technical approach from Seputus. Sounds congeal from all angles and at frightening speed and the band that comes to mind initially is the mighty Meshuggah. Opening volley ‘The Fist That Makes Flesh’ is an unwieldly walk into the wilderness through which you run the risk of sensory overload.

On ‘Desperate Reach’ the guitars collide with devastating power and such is the unfathomable cacophony of destruction spinning in circles above your head making sense of it is not always easy. But make no mistake, there are clearly defined patterns and paths to tread within the melee and once you’ve latched onto a groove or pummeling rage of blastbeats the picture becomes less hazy.

The album’s title track feels a bit like being caught in the eye of a storm, occasionally suffering blows to the head as random objects circulate wildly leaving you struggling for breath and with roughly the same sense of direction as a novice climber trying to reach the peak of Everest sustained by an A-to-Z, a packet of mints and a can of Dr Pepper.

It’s no surprise to learn that Schwegler has channeled some of his own experiences of conflict into Seputus and the result certainly makes for an explosive album. A couple of flesh-ripping hand grenades are thrown in towards the end in the rapid fire ‘Attrition Tactics’ and ‘Haruspex Retirement Speech’ both of which seek to inflict as much carnage as possible in as short a time span as is allowed. Both tracks are furious, frenetic and frightening in their intensity.

Final number ‘No Mind Will Enshrine Your Name’ stretches out across six minutes and is certainly a more restrained heavy pounder of a song, the tempo taught rather than tortured, although still no less chaotic in its own way. In many ways the savagery feels more visceral as Seputus lay to waste anything that crosses them, with a particularly damaging groove and Moore barking out missives with impressive conviction.

Man Does Not Give is a confrontational release, but one that is compelling in equal measure. With writing already underway on a follow-up it seems that Seputus are intent on making a name for themselves. 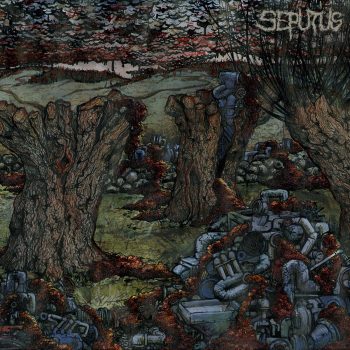