I thought it would be poignant to break the standard conventions of reviews and tell you exactly what I think of this EP from the beginning. In that case; well, it’s pretty awesome. It would be fair to say that Hemel Hempstead’s Second Rate Angels haven’t had a bad career thus far, having played at Bloodstock Open Air Festival and having shared the stage with the likes of Beholder and Zico Chain. It would be even fairer to say that this EP; The Lost Days is going to take them even further.

Opening track ‘Give it a Name’ is a blistering example of the potential Second Rate Angels have, it has pace, aggression and some pretty fine vocal work from lead vocalist and bass slapper Dave Gobran. In all honesty it reminded me of a raw Bullet For My Valentine, and yes, I’m fully aware of how bold that statement is. Following track ‘Dragged out’ is the highlight of the EP itself, guitarists Chris Lewis and Matt Clark are given the freedom to let loose and show us all what they can do, turns out, they can do quite a lot. Have the air guitars at the ready, you’ll need them for this one.

Finishing tracks ‘Lost Days’ and ‘Black Ice’ show that Second Rate Angels have enough variation of riffs, drum solos and powerful vocals to take things slightly heavier. Drummer Andy Doran gives an unforgettable drumming master-class throughout and is never over-powered by those mind-twisting riffs, he simply accompanies them, which is the sign of a particularly good drummer.

The Lost Days is an example of how taking time and care with an EP can pay off. With such a saturated market of bands on the scene there is always a temptation to get as much music out there as quickly as possible. Second Rate Angels have resisted this and taken their time with what is a damn near perfect debut EP. I would not at all be surprised if Second Rate Angels are on the lips of a whole lot of people around the country very soon. 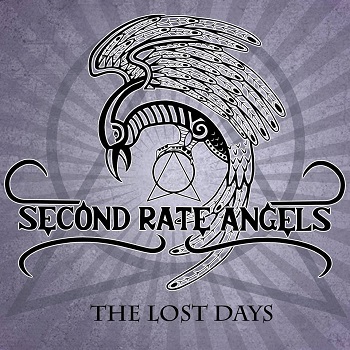