Following on from their first Stage It concert on June 20th, Saxon frontman Biff Byford and his son Seb (Naked Six) announce “Stay In. Rock Out. 2” on Saturday August 22nd 2020. 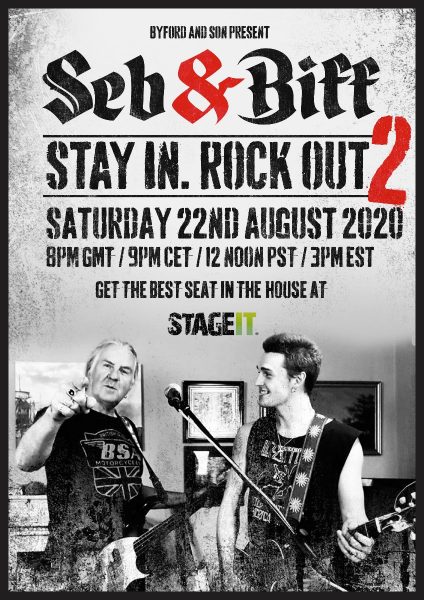 Biff “We had such a great time and a phenomenal response to the first Stay In Rock Out show that we decided we would do it again!  Simple as that, same format as last time but we’ll just change up the songs and the questions”

The limited number of tickets to enjoy the show from the comfort of your own living rooms are available via the Stage It Platform for $5.00 USD (approx. £4.00 GBP) here

For those unfamiliar with Stage It – it’s a streaming platform that allows access to the concert once you have purchased a ticket.  The concert is only streamed LIVE so no option to view again at a later date. Stage It has their own currency called “notes” and 10 notes cost $1.00 – so our show is 50 notes ($5.00).  It’s easy to sign up and you can load notes via a credit / debit card or Paypal and you can use these to purchase tickets for any of the other Artists Stage it hosts and also to tip those Artist’s if you wish to.  There is a cool Chat screen also that you can use to talk to other concert goers before the concert, during and after and also you can submit any questions here also.

Best to log on via a laptop or desktop as mobile devices have been known to not always work as they should.