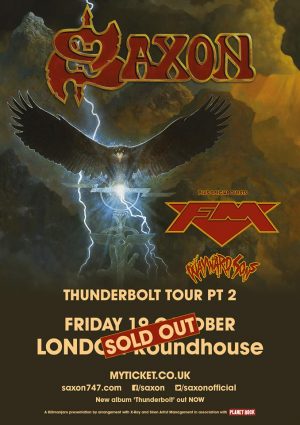 For those passing by The Roundhouse on this unseasonably warm October Friday evening, the scene was something straight out of the 1980s – denim jackets, mullets, bandanas – the whole shabang. A whole load of extras from The Goonies! Or indeed… a whole load of diehard Saxon fans.

The London leg of their Thunderbolt tour saw the iconic Chalk Farm venue filled to the rafters with old school metal lovers flocking in from all points of the compass. Thunderbolt was released earlier this year and staggeringly marks Saxon’s 22nd album.

But for the majority of those gathered in North London tonight, the release of the latest album is not the main event. Instead, the true favourites of a memorable night are by far the golden oldies.‘747 (Strangers in the Night)’ and ‘Crusader’ whizzed us straight back to 1980 and gave Paul Quinn the opportunity to remind us of his lasting and unrelenting axe athleticism. Darting with his guitar around the vast Roundhouse stage sporting a bandana and archetypal rock star blacked out shades performing riffs and solos which have now become not only legendary within metal but have come to mark and define a whole musical era.

‘Wheels of Steel’, the title track of their second studio album was another familiar number which really got the mullet-haired-headbangers going. These sort of songs provide light-hearted musical relief which at times can border on cheesy – but perhaps this is the point. Saxon are straightforward old school heavy metal and have never had any pretensions to be anything else.

Indeed, they provide a celebration of the old school. They even began their set by walking out to AC/DC’s anthem ‘It’s a Long Way to the Top’ – which was greeted with feverish excitement bordering on hysteria – this was a true Tardis-level of time travel which we were about to embark upon.

Biff Byford as ever puts on a magnificent show, his charisma and stage presence the main reason that this time travel journey remains both endearing and effective. He did grumble about the stage lighting at one point, which seemed to suffer technically, plunging the room into darkness. Oh, and he comically complained about his mobile when attempting to film the crowd for the Saxon Facebook page!

The 1980s doesn’t have time for such technological nonsense. For the encore, Biff even requested a battle vest from a member of the crowd, which he wore proudly for the rest of the set over his own gothic-military ensemble. That fan in the crowd got it back – just in case you were wondering.

Saxon hurriedly brought their set to a close as they reached the 11pm curfew. The last five minutes were filled with (abridged) versions of ‘20,000 Ft’ and ‘Denim and Leather’. This was a night in which we saluted one of the original British metal greats; an uplifting celebration of a band who massively influenced not just metal, but a whole era.