Saxon’s concerts on St George’s Day have become something of an institution and an opportunity for flag waving patriotic metalheads to celebrate with one of the most British of metal bands. Recorded live at The Ritz in Manchester during the Sacrifice World Tour, it sees Saxon in fine form. From the atmospheric opening and full on power of ‘Sacrifice’, you know this must have been a cracking concert to have been at. Mixed and mastered by familiar collaborator Andy Sneap, the album sounds fantastic, packing the heavy punch that you’d expect with a crispness and clarity that captures the atmosphere perfectly. 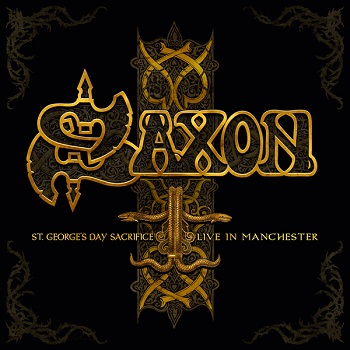 Biff’s lyrics have often touched on military history and the occasion lends extra weight to tracks like ‘Crusader’, ‘The Power And The Glory’, and in particular tonight ‘Broken Heroes’ which is dedicated to the fallen soldiers of the Falklands. ‘Never Surrender’ was 32 years old when this concert was recorded and it certainly stands as testament to Biff and the boys, whose career has seen its fair share of ups and downs over the years. They have always remained true to their music, and thankfully they are now given the respect deserved as one of the foremost exponents of the NWOBHM genre.

The band seems to feed off the crowd reaction. The twin guitars of Scarratt and Quinn sound superb on ‘Dallas 1PM’, and the Manchester hordes sing along with ‘747 Strangers In The Night’ and ‘Wheels Of Steel’ as if their lives depended on it. By the time of the encore, Byford has whipped the crowd into a frenzy for ‘Strong Arm’, ‘Denim & Leather’ and ‘Princess Of The Night’ to finish off on a massive high.

At two hours long not only is it incredible value for money, you get all the classics that you expect, but plenty off the new album given an excellent document of the band in 2013, and reminder of anyone who saw them on the Sacrifice tour. Saxon has released more than their fair share of live albums over the years, but playing live is when the band is in their element. This release will sit more than comfortably alongside their classic The Eagle Has Landed.