Following on from Saxon‘s vinyl reissues box set Eagles And Dragons last year, similar treatment has now been given to the same era of Saxon history (1991-2009) in a CD format by means of a lavish box set, the Solid Book Of Rock. The set consists of every studio album released from Solid Ball Of Rock through to 2009’s Into The Labyrinth and is presented in a 12″ square 24 page hardback book featuring new artwork from long standing art collaborator Paul R Gregory.

The late ’80s and early ’90s were not the best of times for Saxon. As they headed towards their 10 year anniversary, their final album for EMI, Destiny, was probably their weakest yet. It was a band trying to evolve but struggling. Perhaps more damaging still were the press who were quick to ridicule the band, writing them off as old hat and past it in favour of championing grunge and emerging alt rock bands of questionable musical ability (whatever did happen to Fudgetunnel?!) Strange then to see some of those same ex-Kerrang / NME journos show so much love for the ‘Mighty’ Saxon in recent years. Time, it seems, has allowed Saxon the respect they deserve and for them to be appreciated for the class act they are and the undeniable contribution they have made to metal.

While the box set is ostensibly just a record company re-issue, it is interesting that it should coincide with a significant point of revitalisation of the band. Now signed to Virgin, Solid Ball Of Rock saw Nigel Glocker returning to the drum stool and a fresh faced Tim ‘Nibbs’ Carter joining on bass replacing the somewhat lifeless Paul Johnson. This was just what he band needed at the time. Having joined for the 10 year anniversary hits tour, Nibbs added an energy to the live shows but of greater significance was what he added to the songwriting. The material immediately had a much harder edge to it than the previous few albums and a more contemporary sound. An epic title track, and the molten metal nuggets of ‘Altar Of The Gods’ and ‘Baptism Of Fire’ power the album along and mix well with the slower sing-a-long of ‘Ain’t Gonna Take It’ and ‘I’m On Fire’. It also features their celebration of rockers taken from us all too soon with ‘We Will Remember’ which still remains a live favourite today. 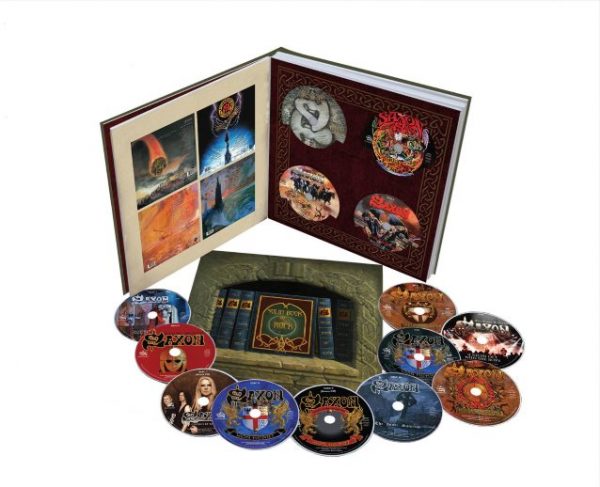 Come 1992 Saxon were no longer with Virgin and the follow up, Forever Free, was released on the unlikely Warhammer label. A company more familiar for fantasy role playing games than heavy metal, its not surprising that the promotion for the album was left wanting. Musically, it’s another solid offering with more direct rock tracks although some varying topics are covered with the belting ‘Hole In The Sky’ addressing fears of ozone depletion and Destiny’s ‘Calm Before The Storm’ is reworked in acoustic style for ‘Iron Wheels’ addressing both the demise of Biff’s father and the Yorkshire mining industry in which he worked. Although with 25 years of hindsight, there are a couple of weaker tracks on this one, especially the cover of ‘Wanna Make Love To You’ which hasn’t aged well.

Dogs Of War, and in particular the title track itself showed the band moving in a heavier direction. At the time it was the peak popularity for the likes of Metallica and Pantera and this undoubtedly had a bearing on some of the writing. The album has some classic moments with ‘The Great White Buffalo’ being a stand out moment as Biff sings of the wild west from the view point of the native American Indian. Elsewhere, ‘Burning Wheels’ and ‘Yesterday’s Gone’ serve up some classic Saxon with catchy riffs and solos to match. However, the writing was on the wall for Graham Oliver who clearly no longer fitted with the direction the band were moving forward with, and he left Saxon before the tour to support the album. 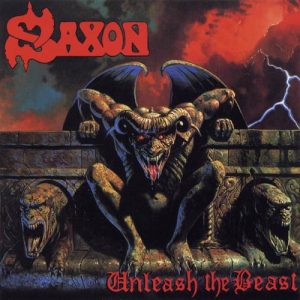 As with Nibbs, Oliver’s replacement, Doug Scarratt, joined the band for a stint of heavy touring before they hit the studio. He was a perfect fit, and seemed to boost the collective creativity of the band and the resulting album, Unleash The Beast, was nothing short of a masterpiece and stands shoulder to shoulder with the classics of Wheels Of Steel and Strong Arm Of The Law. It was the start of a pattern of subsequent albums to start with a short atmospheric instrumental before the main album gets underway with the title track which sees Biff Byford in fine form with a commanding performance and some blistering solos from Quinn and Scarratt. There’s no shortage of tasty riffs, as the album continues and covers a wide range of subject matter; out of body experiences, the battle of Rorke’s Drift, vampires, religion and the media. The only let up is the heartfelt ballad, ‘Absent Friends’, written for colourful tour manager JJ who had recently died. The quality of the production should also be mentioned which is crisp, clear and punchy. The use of soundbites from the film Zulu (‘Thin Red Line’) and TV evangelists (‘Preacher’) have a great effect in completing the songs in much the same way that Dallas 1PM benefited from the inclusion of the Kennedy assassination broadcasts.

The follow up of Metalhead was probably the heaviest offering to date with ex-Sinner drummer Fritz Randow filling in on drums in Nigel Glockler’s absence. Maybe not quite as easily accessible as other albums in this set, it’s not without it’s rewards; the light and shade of ‘Conquistador’ telling the history of the Spanish conquest of South America is an early stand out moment. However, the best track is left until the end; ‘Sea Of Life’ is a majestic epic that clocks in at just over 8 minutes with incredible dynamics. I found myself giving this repeated listens.

While Saxon have maintained a core following in the UK playing similar sized venues throughout the period covered by this box set, Metalhead seemed to mark a resurgence of the band within the wider metal community both in the UK and abroad. 1999 saw the start of a long relationship of the band playing at the Wacken Open Air festival in Germany. The new millenium saw the release of Killing Ground which continued the momentum with the band headlining the first Bloodstock festival, bringing the infamous Eagle lighting rig back to the UK, and a return to significant tour dates in the States. The album itself showed some proggier elements to the band in ‘Shadow On The Wall’, and not least the King Crimson cover of ‘Court Of The Crimson King’, nestled amongst the heavier tracks of ‘Dragon’s Lair’ and ‘Killing Ground’.

Around this time, the band also took the opportunity to re-record some of their earlier classics with the current line up. A double CD was released in 2002 featuring the re-recorded songs and some new live material. However a taster of 8 of the tracks were included with the deluxe edition of Killing Ground, and they are also featured here on one of the bonus discs of the box set.

Having started a tradition of St George’s Day concerts in the UK, 2004 saw their patriotism take a step further with the release of the Lionheart album exploring some very traditional English themes. Another fine album with no fillers. ‘Witchfinder General’ kicks things off in a menacing style with Nibbs’ bass to the fore. ‘Man And Machine’ follows which is packed full of energy and almost as fast as the subject matter; Donald Campbell’s Bluebird speed record attempt. It’s a headbanging classic which features some nice harmony guitars before a searing solo. ‘Lionheart’ itself is almost a follow up to ‘Crusader’, telling of the return to England of Richard 1st to claim the throne. Having already had songs about trains, planes, motorbikes and cars it’s only right that they get round to a song about a boat and ‘English Man Of War’, the flagship of the Elizabethan Navy is a worth addition to Saxon’s mode of transport roster. 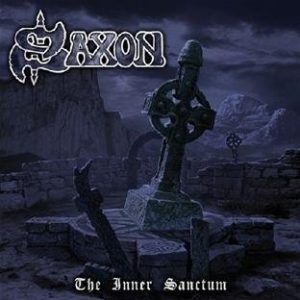 2007 saw a rejuvenated Nigel Glockler return to the band for The Inner Sanctum. Opener ‘State Of Grace’ is suitably dynamic with fast, guitars and tight drumming to match balances with slower sections and a tasteful solo. ‘Need For Speed’ continues in the same vein and ‘Let Me Feel Your Power’ is faster and more aggresive still. ‘Red Star Falling’ is a welcome slower number as Biff gives us a history lesson in the fall of cumminism and collapse of the Soviet Union. Light relief is the provided in ‘I’ve Got To Rock (To Stay Alive)’. With great production, no fillers and another historical 8 minute epic in ‘Atilla The Hun’ to close, The Inner Sanctum is another highlight of the box set.

By comparison, the final album in this set, Into The Labyrinth, is a bit of a disappointment. It starts off in style with the excellent ‘Battalions Of Steel’ and ‘Live To Rock’. Then there’s another classic Saxon tale in ‘Demon Sweeny Todd’ which features all the expected hallmarks of atmospheric intro, fast delicious riffs, a thundering rhythm section and Scarratt and Quinn trading solos. ‘Valley Of The Kings’ continues along the same lines and is quite majestic, but thereafter the quality of the songs drops off massively. ‘Slow Lane Blues’ in which Biff sings a whole song about getting a speeding ticket, and an unimaginative ‘Hellcat’ give the impression that the band are struggling with ideas and need to meet a deadline with the album. After an excellent first half, only ‘Voice’ offers up something worthwhile in the latter half.

The bonus discs feature the aforementioned re-recorded classics disc, and a rough mix of the Lionheart album that came with some versions of the original CD. On the DVD front there’s the ‘Night Out With The Boys’ featuring interviews and live tracks which was originally included as a bonus disc with the deluxe Inner Sanctum release and a further DVD with the content from the ‘Into The Labyrinth’ bonus disc of Biff acting in the short film ‘Perceval’ and an interview with Biff.

The earlier albums here also feature the same bonus tracks that were made available on subsequent re-releases, which were predominantly live tracks, so in terms of content, the avid Saxon fan will find nothing new. There’s no unreleased tracks or album out-takes here which is a shame as it makes it an expensive addition for the die hard fans who probably own all the albums already. For those that may be new to the band and only have a couple of albums from this period, or own downloads only, this sumptuous offering represents real value for money, and those ordering from Amazon early enough will be able to bag a copy signed by Biff Byford.

Solid Book Of Rock has allowed a reappraisal of their work of this period, and what is apparent is that Saxon have always maintained a high consistency of quality. In a collection of nine studio albums that covers some ups and downs and significant changes within the band, there’s probably only a handful of fillers which is an impressive feat in anyone’s book. True to their word, they have Never Surrendered and remain the most prolific of the bands that came to prominence in the NWOBHM period. Long may the mighty Saxon reign supreme.