Paul Castles dusts down his denims for a step back in time with heavy metal giants Saxon, whose 40-year anniversary is being marked with a double album celebration, released on 17 November, 2017, courtesy of BMG Music

Saxon is a name etched into the very annals of UK metal history. With their legacy now having reached 40 years, a celebration of sorts is definitely in order and Decade of the Eagle fits the bill nicely. This deluxe anthology consists of 34 tracks all taken from the band’s first nine albums. Essentially the songs are from the heady halcyon heyday of British heavy metal in the 1980s, a time when the likes of Saxon, Judas Priest and Iron Maiden frequently figured prominently in the album charts on both sides of the Atlantic.

As one of the leading pioneers of the much heralded New Wave of British Heavy Metal movement Saxon helped influence and inspire countless bands across the world, among them giants of the genre such as Metallica, Pantera and Motley Crue. Other than one or two minor indiscretions,  Saxon always stayed true to themselves, shunning any of the various nuances and trends that crept into metal over the years. The men from South Yorkshire were, and of course still remain, pure heavy metal – plain and simple.

Frontman Biff Byford has always been one of metal’s most natural and engaging performers, ensuring that their live shows have proved every bit as appealing as their prodigious production line of record releases. Having won fans over with their enthusiasm and drive when supporting the likes of Motörhead at the very start of their career, Saxon have rarely been off the road since.

They’ve arguably clocked up more air miles than Tim Peake and remain popular and trustworthy features at major summer festivals across Europe, having been stalwarts at Monsters of Rock back in the early days. They also performed with distinction at Bloodstock a couple of years ago. Blast Decade of the Eagle through your sound system and you don’t have to wait long to appreciate their endearing appeal to the metal masses, with balls out classics such as ‘Stallions of the Highway’ and ‘Backs to the Wall.’ 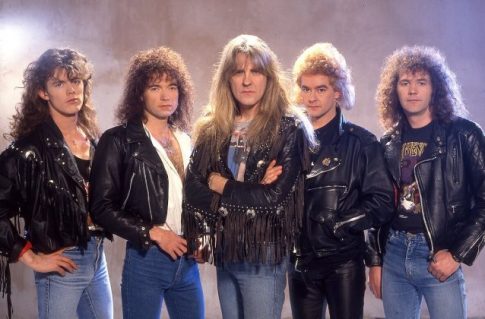 Their songwriting skills are a match for most, and of course they are blessed with a truly wonderful singer in Biff Byford, who can sail through the nut-tightening high notes by the barrowful but then on songs such as ‘Militia Guard,’ ‘747 (Strangers In the Night) and the wonderful ‘Suzie Hold On’ you also appreciate what a clean finely-tuned singing voice-box the Yorkshireman has. Technically, Saxon have rarely been anything but excellent throughout the passing of the years.  Songs such as the timeless ‘Wheels of Steel,’ almost ooze denims and leathers through the speakers. The 18 tracks on CD1 include a couple of live recordings, ending with ‘Power And The Glory.’ CD2 has more wonderful trips down Memory Lane, the slowly moving ‘Crusader’ and the spikier ‘Devil Rides Out’ among them. ‘Rockin’ Again is a monster (of rock) track, gently meandering with great swagger and self-belief as Biff sings his heart out in his own inimitable style.

This comprehensive 40-year celebration is all the more satisfying when you consider that the line-up has been fairly constant throughout. Guitarist Paul Quinn was there with Biff back in ’77 while drummer Nigel Glocker joined in ’81 and other than one five-year break has remained faithful to the cause throughout, while bassist Nibbs Carter joined in 1988. Of the current line-up only guitarist, Doug Scarratt didn’t figure during the original recordings, although it would be a tad churlish to call him a ‘newbie’ when he joined the Saxon family 21 years ago!

Clearly fans from way back when will have much of this material already. True fans will no doubt still be rummaging under the tree in a few weeks to see if Santa has smuggled this highly collectable compendium down the chimney. It comes in 4LP (180g vinyl) and 2CD deluxe editions with a gatefold sleeve that features a special metallic embossed coin on the cover. They include liner notes penned by Biff in which he shares some of his own memories of a decade that defined heavy rock and metal for generations of headbangers. Saxon are not done with things yet either. New album Thunderbolt – that’s number 22! – is due for release on 2 February.