From recently-founded Finnish label Saturnal Records – of whom you can find out more about on Soundcloud, YouTube, and their website – we have a couple releases for review.

After much trial and tribulation, from Hellspirit comes their debut album, Dawn Under Curse, and from misery merchants Blood Red Fog comes album number three, On Death’s Wings.

Read both or click the band name to go to their review.

Finland’s Hellspirit have been at it since 2004, their first two demos appearing in 2005 and 2006 and a split with the mighty Nocturnal Graves emerging in 2010. With recording beginning in 2012, Dawn Under Curse, the band’s first full length, was almost released but the label suddenly ceased to be. Come 2014, Ten years since their formation, and Hellspirit would be the first band to sign to Saturnal Records and their album is finally being released. And they lived happily ever after. Well, not quite. With thrash and heavy metal at its foundation, the raw black metal of Dawn Under Curse has much more in common with the beast than it does beauty.

The steady gallop of traditional heavy metal, ice-cold riffs, and melodic lead work of militaristic opener ‘Call To Arms’ sets the tone for the album: all-out war. Embodying that war-like spirit in concentrated bursts, the six epic tracks runs the full gamut of black metal dynamics from the slow and atmospheric to the grand and ferocious, the melodic lead lines balanced well with the martial aesthetic. An ominous and almighty beast, Dawn Under Curse is an impressive work, the band as skilled in song craft as they are musically adept and their debut is one that fans of black metal fueled by unwavering devotion and determination will lap up. 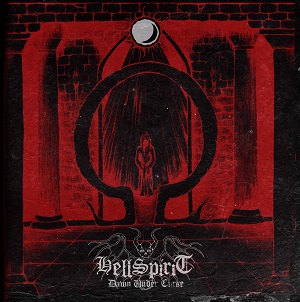 The second band to sign with Saturnal Records, Finland’s Blood Red Fog, the brainchild of originator B.R.F.,  composed their first material in 2004 and since then have produced two albums, their eponymous debut appearing in 2006 and after a series of splits and EPs, their second, Harvest, appeared in 2012. A quick listen over their previous releases and it’s apparent that Blood Red Fog has always kept it simple, their sound stripped back beyond the skin, the flesh, and the bone directly to the very marrow of black metal. What makes their work interesting however, is that they can make this simplicity work for tracks far in excess of the five-minute mark, even as far fourteen minutes on occasion. And On Death’s Wings is to be no exception.

Drenched in woe, the landscape of this album is tortured, its journey harrowing, and its experience dreadful and disturbing. While the riffs are torn form the guitars and the drums thud and crash away in the middle distance, B.R.F. wails and shrieks his torment and suffering. Musically, there’s not much difference between the tracks but it’s the depth of emotion that is the most captivating, its lightless gravity compelling. Of particular note are the ten minute ‘Liberation’, its journey through melancholia and spectral density unsettling, and the lead work in the coda ‘As Lightning From Heaven’, an underused aspect of the band that sharpens the track’s cold frame. Akin to depressive black metal, if the ice cold atmospherics of early Burzum (i.e., when he was good), the calm intensity of Drudkh, or the harsh and primitive aesthetics of Horna, then On Death’s Wings is a worthy addition to your collection. 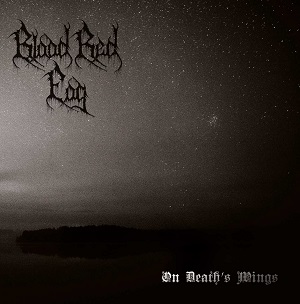