The Electric Blues Rebellion saunter on stage and begin playing a crunchy upbeat funky rock beat. You have to look hard to see the drummer; he’s tucked away in a corner behind the main act’s keyboards. Then, on walks Paul Bridgewater, a familiar face in this neck of the woods, having served previous time in Radio Moscow (with Diamond Head’s Brian Tatler) and further afield playing the European blues festival circuit with Slowburner. His subtly smoky voice floats easily over the music on a song that’s appropriately titled ‘Take It Easy’, scatting and rapping away as his right handed guitarist turns in a solo devoid of the usual clichés.

The next number has an off-kilter old school R ’n’ B feel, the one after that boogies with a slide solo and some vocal gymnastics. Mr Bridgewater may have lost hair on top and be fronting a whitening goatie under his chin but his vocal cords remain top notch. He throws a pose here and there, but mainly he’s just moving to the groove. “I got the train – You ain’t gonna ride” he sings following a drum solo that introduces the next number’s Bad Company structured blues rock.

Keyboards and guitar play with pretty and ethereal chords on the melancholy lonesome cowboy narrative that is ’Setting Sun’, and once more you acknowledge the six-stringer’s style is more akin to the late Ollie Hassall or Ray Fenwick than the usual blues suspects.
“This is our second gig tonight” the singer smiles as the band bounces rocking hard with harmony vocals at play over what’s a fairly straight number but with tempo changes and an almost telepathic interaction between them. It allows Bridgewater’s voice to now demonstrate both a wavy guttural vibrato and a silky reed high end.

A honky tonk piano leads us into a cover of Dave Mason’s ‘Feeling Alright’ as good time funk before concluding with a version of ‘I Don’t Need No Doctor’. The audience could be bigger that’s for certain but they put in a great set well worth coming along for, and each song has received strong applause. While we don’t get much busier people do get up off their seats and come forward as the time draws near for the main act.

And so it is that an organ whirrs into life, and echoed guitar notes bend out as the rhythm section begins to rumble. It’s almost an inversion of Floyd’s ‘Shine of You Crazy Diamond’ until guitarist Ash Wilson strikes out with some full chorded rock and on she sashays decked out in black with some sparkles here and there. “Welcome to The New Revolution” calls out Sari Schorr declaring tonight’s plan of action: offering a song from an album yet to be released while making your hair stand on end into the process. On stage she’s all go: emotive, raunchy, expressive, hollering and screaming, and singing her heart away.
They ease into a more laid back groove for the next number as she sighs, and purrs out the lines “Damned I’m in love with you!” It gets progressively harder; the band’s sweeter male harmonies creating an interesting aural dichotomy compared to her own raw blues belt-out her, with lots of added drama. The applause gets bigger still. 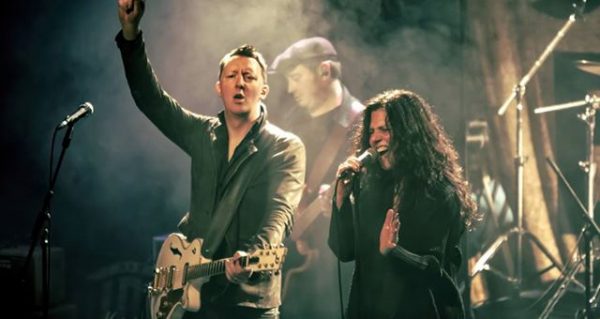 ”You made my second album more personal, but that’s when it gets interesting” she announces, discussing how the success of her debut has allowed her the freedom to write more personal songs. That ‘King Of Rock And Roll’ is actually about Robert Johnson matters not one iota. Technically we can note there’s a capo applied to the guitar for this heavy desert blues rock, her voice rippling in warmth before a euphoric raunchy roar and melodic big hook chorus takes hold, with a tasty biting guitar solo placed neatly within the whole framework.

Drummer Roy Martin starts the next number off, the band and audience clapping along prior to Wilson distorted guitar cranking up what half sounds like a rocked up ‘Lady Marmalade’. However, it’s from the new album and she works the crowds, with sex and emotion both stripped bare metaphorically. From debut album A Force Of Nature we get the pumping 12 bar blues of ‘Demolition Man’ and it allows Ex-King King keyboard player Bob Fridzema to pepper away demonstrating his funky organ talents, Wilson, with turned up leather jacket but snazzy rather than some old greaser, teases out licks and Schorr plays it sassy, and sure little show-busy but what the heck. ”We’ll stay with the first album” she tell us and begins to relate how living in Paris wasn’t as idyllic as it may seem, and leading her to write ‘Ain’t Got No Money’. An ascending guitar melody leads off this staunch blues-rocker textured as it is with Gallic flourishes, and Wilson’s playing responding to her explosive vocals.

A cover of Mott/Bad Company number ’Ready For Love’ is sung full of equal parts sexual desire, lust, a feeling of abandonment, and being lost in need of something to get you through the night, before she becomes affirmed in righteous anger practically demanding to be satisfied. Or maybe I’m projecting my personal feeling too far here? Fridzema’s tender and enticing piano solo slips coolly within the framework, on a song at once familiar and now forever altered in the mind.

Martin takes a hefty drum solo, bass player Mat Beable joining in as the crowd clap along to the funk and big fat bluesy roll of ‘I Just Wanna Make Love To You’. I think the pattern is set. It becomes an all rock-out version during the verses with her sighing passionately within the choruses, musically bucking and rutting with muscularity as it gets ever faster and faster and she coos away in high pitch.

A conversation about missing her 3 pit-bull terriers and how they’re going to make her a grandmother is a curious lead-in to ‘Kiss’, but the lady likes to talk in that sharing American show-biz way, and who are we to complain of cultural differences when we get to enjoy the music. For the briefest of moment it feel like a Quo 12 bar tune but things suddenly flash into widescreen with a big power ballad of the Bad Company variety – It then rocks and rumbles with several musical diversion along the way – Me, I was imagining a future version of this with an orchestra backing her while Pete Townsend thwacked away on his guitar.

’Maybe I’m Fooling’ she screams out, rapping melodiously as the band big it up and dig in. This is a great rock track, with some quality slide playing, her own voice offering impressive vibrato without today’s trend for warbling histrionics and never any need for auto-tuning on this stage.

That’s she performing a set that predominately featuring tracks from her new album, Never Say Never, that’s not officially released until 5th October and receiving such a positive reaction too is highly impressive, adding yet another to the set with ’Valentina’. On explaining the story behind Never Say Never’s title track being how composer Ian McLagan missed his wife when she died, you can imagine the old Face looking down himself now and smiling. Hymn like in its recitation, she expresses the lyrics like a character actress reading a play.

Throughout the night dancing, sashaying and flicking her hair with lots of hand gestures and acting out of lyrics Sari Schorr is very pleasing on the eye and just as sweet on the ears. For a girl from Brooklyn she sure talks a lot but new age yak but she’s big hearted, and has an important message or two to declare along the way, for after introducing the band she explains that ‘Freedom’ is “about our ridiculous gun laws”. It veers between heavy knockabout riff and hard funk as soul belter. Her voice is as powerful here at the tail-end of her set as when she first took the stage, and as speedy high guitar notes ensue she matches them in vocal crescendo.

Returning to encore she explains, almost in disbelief herself: “This has become our signature song after we did it Carnegie Hall, just after Eric Bourdon and before Buddy Guy. Ladies and gentlemen, here’s ‘Black Betty’”. Wilson echoed guitar comes on like a like spaghetti western, the song is mournful with full vocals sung like a mantra come prison blues, and maybe a little Porgy & Bess given a Godspell rock opera moment too.
Then, one final number where there’s downtown rhythm and rock walloping with Fridzema’s heavenly organ whirring away before he switches to electric piano for some funky honky tonk. To the end Schorr sounds like she sipped from the same golden chalice that Maggie Bell and Elkie Brooks did in their youth but with added hutzpah and showbiz pizzazz, while dancing like a rock chick and working her ass off all night long.
Let’s face facts, both acts deserved bigger crowds than they received this evening, but those who came along heard some mighty powerful voices, and witnessed a whole lot of talent on stage.