More From The History Channel…

Rock bands don’t make significant money from music sold, neither digital nor hardcopy. They make it from live performance. Full circle. Back in 1978, live performance was the staple diet of rock artists and fans alike. It was an undisputed touchstone of the rock’n’culture. Musicians were judged on their ability to cut it live.

This live album, All Night Long creams off the best stuff from both his “solo” and Montrose material. It’s a cool concentrate of hardcore Hagar, compressed into 40 minutes of unrelenting, grown up party rock. Nothing outstays its welcome. ‘Make It Last/Reckless’ and ‘Turn Up The Music’ are stylish accumulations of riffs and hooks that step into your line of sight, throw a few bruising punches and step out again. ‘Turn It Up’ has a much denser, fuller crunch than the album version and ‘Bad Motor Scooter’, written by Hagar for his debut with Montrose in 1973, not only struck a chord that resonated throughout the seventies, but two generations later – even in elongated form – still packs a considerable punch.

Live recordings don’t always respond well to remastering – the source tapes are often suspect – but here, it’s clear good money was spent both then and now. And of course, there’s the usual bulging booklet and new pics. 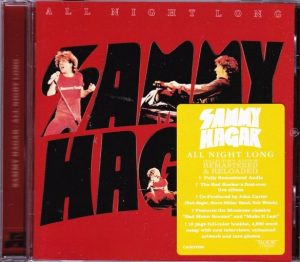