Let’s face it, and let’s not ignore it – Samantha Fish doesn’t look like your average grizzled blues veteran. Picture Marilyn Monroe circa ‘Some Like It Hot’ – except that instead of a ukulele she has a Gibson SG…and can play it like a, urm, motherlover. She also sounds anything but average. She’s a seeker, a searcher, a questing spirit. Borne of a tireless creativity, she rarely stays put in one genre for very long. Basically, she has IT. In spades.

Her new album ‘Kill Or Be Kind’ follows relatively hot on the heels of the achingly brilliant country/bluesy Americana of 2017’s ‘Belle Of The West’ (read our review here). Yes, there’s still blues, it underpins everything, and that guitar is ever present, but that’s merely the tip of this particular iceberg.

Fish drafted in a crack team of co-writers and Grammy winning producer Steve Reynolds and decamped to Memphis to record the album…and don’t it show! More than anything else, this album is informed and fed by Memphis soul – the Stax sound is here in spades – Otis, Booker T, Wilson Pickett and, more than all of these, the great Rev. Al Green. Damn, but this album is soulful.

So let’s tackle the soul first. The overarching theme of this album, aptly, is luuuurve – and the perils and pitfalls contained therein. I don’t know who the bastard who mistreated the divine Ms. F is but, at least, it has given birth to some great songs. They’re smooth, they’re soulful, they’re liquid velvet. They cry on your shoulder and purr seductively in your ear. There’s a dash of Amy Winehouse in there, there are smooth keys and, frequently, a note perfect horn section.

It’s gorgeous, grown up stuff – it’s lived and loved and lost. In a word (well, two) it’s vintage Memphis. But there is also guitar, whether it’s shimmying in the background or launching into solos…be it polished BB King-isms or angular heartbroken fuzz, it’s all up there with the best that blues today has to offer. There are also interesting diversions, be it the Beatles-like intro to ‘Fair Weather’ or the vaguely New Wave momentum of ‘Love Your Lies’ – the ghost of Blondie is subtle, but it’s there.

Oh yeah, the blues. Album opener ‘Bulletproof’ is techno-blues of the highest order – simultaneously dirty and smooth, it’s distorted vocals and raw slide guitar scratch over an utterly modern backbeat. ‘Watch It Die’, meanwhile, utilises the horns and slides out into a swampy midsection full of atmospheric muted vocals and greasy, way cool slide. ‘You Got It Bad’ wraps things up with a rockier, dusty riff and an emotionally raw solo. It all finishes, fittingly, with a lonesome wail of slide guitar.

There will be no fuzzy end of the lollipop for Ms. Fish*. Superstardom, surely, lurks just around the corner , and rightly so. This could be the album to catapult her into the firmament – it’s not blues, it’s not soul, it’s not rock. It’s all of these and none of them…and more. If it needs a label, it’s roots. But it doesn’t – it’s freakin’ good is what it is so get on board.

Released on 20 September 2019 by Rounder Records 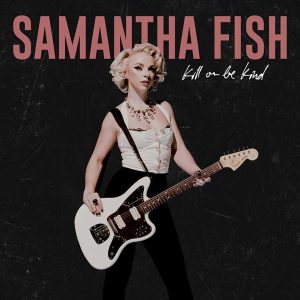