Next month’s likely to see the conclusion of various rescheduled tours due to covid. By tonight’s standards sundry music acts haven’t just been sitting on their backsides but honing their chops, and it’s made the wait all the more special for those parting with their harden-earned cash in these troubled times. 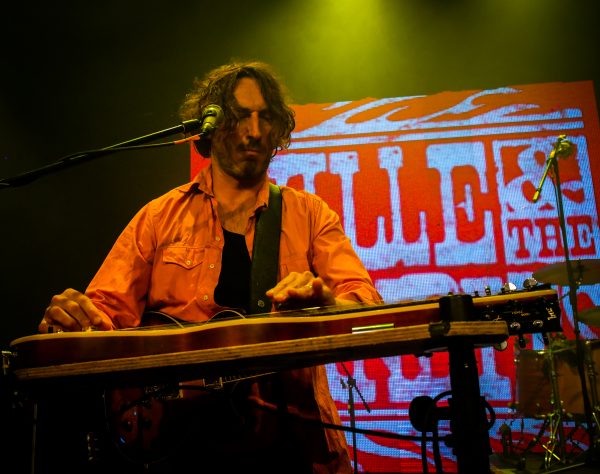 When first I saw them, they were a three-piece and the musical interplay was nothing short of stunning, that rhythm section no more the extended four-piece came across as professional session players but didn’t give me the same tingle down the spine, this evening they’re a band, compatible with some strong songs on offer.

As Floydian echoed harmonics spill out from Edwards’ guitar our attention is focused, the song emerging itself reminiscent of early Fleetwood Mac as the frontman works his way round the stage interacting with the others. Then with a deeper pounding of drums the aptly titled ‘Caught In The Middle’ shifts gets harder only to recoil springlike effecting various nuances allowing the band to settle in and find their feet as what can only be described as funky-folk trip-hop rock. Amid flourishing soundscapes, yellow spotlights spin out and the powerful ‘Refugee’ begins to rocks out with Gothic-echoed guitar ensuing during its later guitar soling.

Edwards jokes about the non-linear route the tour’s taking, and the fun of their vehicle breaking down along the way. Such matters Samantha Fish takes in her stride, he jokes. Meanwhile, stage right, Gallagher is experiencing problems; while his organ’s quiet on the next number it’s the sound coming in from the monitors he’s concerned about once he will eventually get the engineers’ attention. The roots boogie of ‘Keep It On The Down-Low’ takes advantage of both the main-man’s throaty roar and reflective sigh, even as he reaches over to play lap steel with Mackaill accenting it with slap & full funk bass licks. 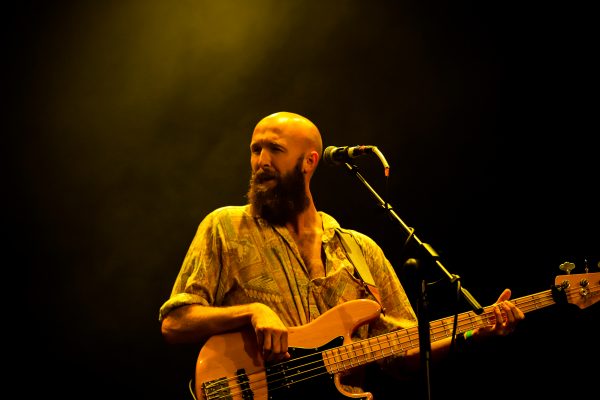 “We need you guys to help us out on this track. We need you to be our Wolverhampton Choir!” smiles Edwards and amid the lines “When will that rainbow come?” there’s also much audience clapping to an over African worldbeat, and much as Edwards proclaims Wolverhampton to be the most receptive audience this far, we must acknowledge we’re only a couple of gigs into a tour and it’s most definitely his voice many gathered here have come to enjoy. “People ask me how I got my husky voice…. It’s just lots of pasties!” the Cornish lad says as he straps on an acoustic guitar and begins to play ‘Four Million Days’ – This heart-breaking song comes across beautifully, as slight deft nuances of keyboards come in and Edwards switches to lap steel guitar, and over an empowered full band chorus, his solo soars heavenwards, the whole work becoming ever more progressively complex in its playing but taking us with it. Another “new record” track follows with ‘Good Stuff’ – Bluesy driving roots rock evoking equal parts ZZ Top and Dire Straits, we also get some slide guitar mayhem and eerie electric piano chills before it finishes. Then, they only go and blow the doors off with the powerful head rush that is ‘1970’ evoking all the ragged glory of those heady rock days in what could be John Martyn fronting Creedence Clearwater Revival; Edwards steps forward to the front of the stage, his guitar soulfully getting increasingly faster but still imbued with melody. “Tell my mother I tried to be a good man,” he screams loudly on ‘Bad News’, and as it rocks out as the band’s final song, there’s few here could deny it’s been bloody good so far. 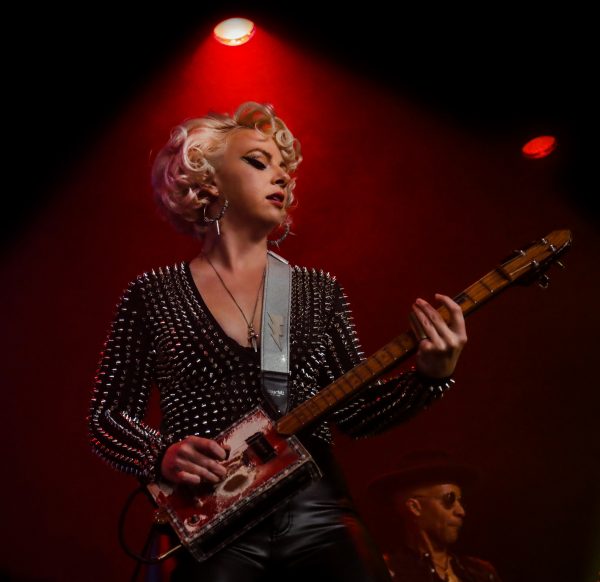 Adrenalin on a high, people rush out to grab fresh drinks or merchandise, and peruse the gig posters while taking a whiz in the loos; and there’s not too long a wait, as lights go down but sparkly bits adorning the half of her outfit, alongside those blond locks of her, we make out the lady of the night, Miss Samantha Fish… There’s no messing about and she launches straight into ‘Bulletproof’. Using two mics, one for verses the other choruses, the former is playing up, buzzing, but she ignores it. Armed with her infamous box guitar, it’ll get surprisingly little wear and tear tonight, in fact there’ll be very few guitar changes. Suffice she applies a hefty slide to it, rocking back and forwards and she solos between giving it all on the vocal front, and taking in the full length and width of as she roams loud and proud, the huge amount of applause coming her way on its conclusion, testifying to it ticking all the right boxes.

Left hand side to the back is drummer Sarah Tomek. She’s a powerhouse, but adds subtly and technique too, while also handling backing vocals, as occasionally do bass player Ron Johnson and keyboard player Matt Wade. Right now, she’s setting the pace as Fish straps on a white Gibson SG. “How we all doing out there? You ready to rock and roll… Just a little bit?” she teases as the band crunch down and she sings over a slow crawling riff with a crafty flick at the end, that’s like something Hubert Sumlin left over back-in-the-day given a 50s rock twist, and ‘All Ice No Whiskey’ and ‘Twisted Ambition’ abut each other as they do on her most recent Faster album, they prove more wider-ranging in scope, and extended in their soloing too as a she moves through the decades, explodes into shrieking feedback 60s heavy blues, then more 70s Page-like licks; her guitar sustaining away, screaming out in pain, with lovely dark throwaway passing notes colouring throughout, all while her voice soars and sighs, and backing vocals keep the album’s more modern mainstream appeal. 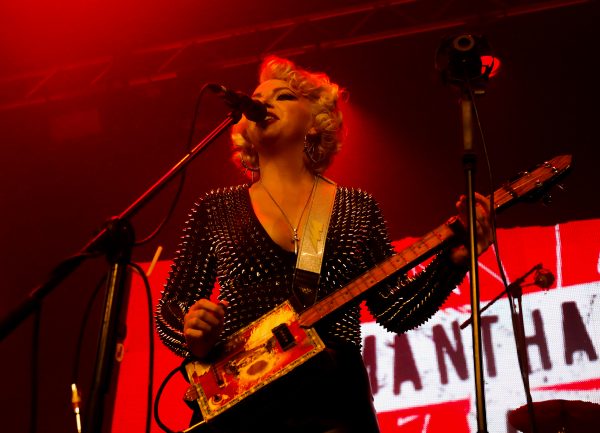 “Feeling sassy out there?” she asks while clicking thumb & forefinger of both raised hands. ‘Chills & Fever’ takes the heat off, a little, coyly the tune plays its way through, but when some spiky notes are picked out, heralding a heavier roar to follow. She’s got itchy fingers alright, and tonight they wanna play. As the next few numbers ensue, we move from heavy rock to soul-fired funk ala Prince by the time we get to ‘Hypnotic’, whiles there’s a smoky-slide boogie stomp to ‘No Angels’. Five minutes later you’d think Albert King had been reborn, only for a kind of Stones-go-punk rhythm to blend out, while sexual coyness proves a two-way street, she singing, her audience standing there open mouthed at her playing.

Looking through my mangled notes, page after page repeats how her actual guitar playing has improved since last, I saw her, but people acknowledge she can play, what they don’t give anywhere near enough respect for is how great a singer she is live. Likewise, her lyrics can be wicked, worldly-wise, or simply sensual, to pretty much each and every one tonight she delivers them well. 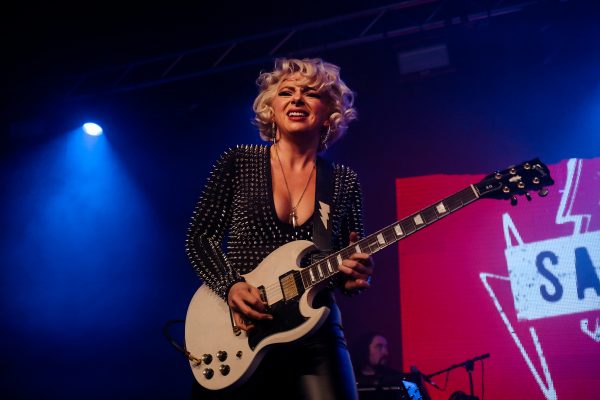 “Put your hands in the air!” she calls out and as the crash-and-burn riff runs wild there’s a room full of people repeating the words: “Right now, right now I’m feeling it,” as the mighty ‘Bitch On The Run’ is played with hard metronomic precision, exploding with fury as a flurry of angry notes pour out, her head held back, a determined look on face as she solos at the front left hand side of stage. As the audience claps away, Wade solos on organ, then following a torrent of Stax heavy-booted chords that my notes claim went: “Chakky-whakka!” she introduces the various members of the band, for whom we proceed to applaud, with her offering we can continue, for our own roles: “As star of the show!”. She obviously couldn’t hear me singing out-of-tune. “We came all the way from the USA, we waited two years” she reflects, but that was the past because with the next breath they’re back in the thick of it with “Right, now…” She vamps over the top, there are Who-like power chords followed by a gospel organ then Ramones style guitar over which we get female harmony vocals. I kid you not.

She hits high notes with the emotive ballad ‘Dream Girl’ that takes on an anthemic form even as the organ steers its towards a more progressive route, and she herself bends down applying feedback and effects to colour the sound. Next, there’s deep-in-the-pocket crunchy blues rock, ‘Black Wind Howlin’’. There’s still power and scope in her voice, and her guitar playing continues to be inventive and dynamically explosive. Fish and Johnson face off each other, bass responding in kind to guitar playing, ever extending the songs it now sounds like Zeppelin playing The Beatles’ Sgt Pepper, but not for long, as light career all-round the venue and I’m waiting for a siren to go off but instead hear the ace thwacking of Tomek’s drumming as lights to proceed to flash on and off and a final wall-of-sound guitaring call time on the main performance.
We are entreated to but one encore, Fish playing acoustic, backed by Wade’s hymnal organ, and the lines: “Don’t let it bring you down, it’s only castle burning, find someone who’s turning, and you will come around,” summing of the cathartic experience this evening has been. It’s Neil Young’s ‘Don’t Let It Bring You Down’, her nasal-vocal approach here suiting the song, that is initially hefty country pop rocker, then with a switch to electric guitar rocks out loud, until the words, “Thank you, so long!” tell us that’s it. We got our money’s worth, with unexpected interest.