Reviewed by Brian McGowan and released by 3MS Music on 1 December 2017.

UK rising stars Saints of Sin are admittedly influenced by Van Halen, Bon Jovi, Whitesnake and, well…let’s just say they’ve digested a lot of Guns’N’Roses’ albums, whose eighties’ reinvention of hard rock provided the riff and tumble template from which Welcome to The Circus has been struck.

That’s emphasised by the opening track – for which the album is named – an homage to G’N’R in both title and style. There a difference of course between homage and wholesale appropriation of a rock band’s musical identity, and while there’s no trace of original thinking here, you have to say it’s done with such conviction and style that it’s hard not to be impressed.

‘After Dark’ and ‘Rocket’ are perhaps hogtied by their own format. Yes, they burn with intensity and ambition, but are a little too formulaic, leaning heavily on main man Marcus Jenkins’ swarming guitarwork to carry their wafer thin melodies.

Then they roll out the good stuff. The hooky if derivative choruses of ‘Wasted Night’ and ‘One Last Time’ are truly emblematic of an era, both showing the band have an ear for the finer points of Melodic Rock as well as a firm grasp of the essentials.

There’s a definite Lynch Mob / Dokken feel to ‘Running’ and ‘One More Minute’ (arguably the album’s standout track). Both songs sparkle with the flicker of a harder, more metallic edge, and there are enough affecting moments scattered around the remaining tracks’ strums and stomps to indicate a successful future.

We could have done without the faux circus, big top ringmaster intro though. An unnecessary distraction that takes away from the music to follow, rather than adds to it, and that whole clown thing is so last year.

This band have the chops and the attitude, but if they want to grace the world’s arenas, they need to write a few more truly outstanding compositions. They clearly have their noses up against the glittering shop window of fame, but as always, great songs are the key to the door. 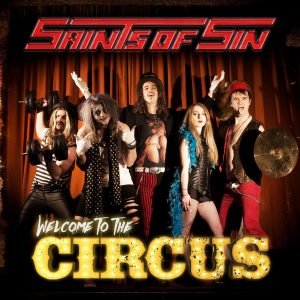