‘Musical differences’ got in the way of the third Saigon Kick album, so vocalist Matt Kramer and bassist Tom Defile departed. Jason Bieler took over on vocals, wrote all the songs (except one, a cover) and again produced.

With 1993’s Water, his sprawling ambition, was, as per usual, interpreted by music critics as “scattershot”, “lacking a proper narrative”, “employing too many sounds” and so on.

In reality, Bieler’s musical themes, ideas and moods had cast aside the dead hand of Corporate Rock and ignored the grunged up sound of Seattle. Totally in charge now, he refined and enriched the band’s previous two efforts. Water has all the firepower and kinetic energy of The Lizard, but is alternately subtle, intricate, dramatic and in places, boldly experimental. It all adds up to an eminently satisfying and much more cohesive whole.

No surprise either that Bieler’s love affair with The Beatles’ Revolver album blossoms on a couple of tracks. From the minor chord majesty of ‘Sgt Steve’ to the title track’s sitar referencing guitar hook and foot shuffling tribal rhythms. There’s a flavour of Bowie’s wall of sound creations in there too (and indeed he covers ‘Space Oddity’ here, a version that quickly becomes a beautifully rendered tribute to Bowie and the inventive pop music of the sixties).

The feeling of processing and maturing in these tracks and others works its way through the album, and is particularly notable on ‘I Love You’ and ‘When You Were Mine’. On The Lizard, Bieler was not afraid to write and include an out-and-out love song, ‘Love Is On The Way’ (though it had a suspiciously manufactured aura). Here, both have the ring of the confessional, and the lyrical link Bieler makes between love and humility is striking. He embellishes the latter track with baroque orchestration, full of skyscraping strings and plunging cellos, shadowing the emotions at play.

‘Torture’ and ‘My Heart’ return us to safer and indeed, the more familiar ground of acid flecked, garage rock heaviosity. The first is a psychedelic bruiser, while the second favours Bieler’s clipped, rapid fire vocal phrasing.

The controversial ‘Fields Of Rape’ is a significant downshift in tempo and mood. Bieler wanted to use this track as the album title, but understandably, the label said no. On it, he tackles the thorny subjects of guilt and resolve, condemning us all for ignoring the atrocities we see year in, year out, in war torn countries around the world. It’s a compelling piece, but is arguably just one part in the musical and lyrical jigsaw that goes to make up any emotionally satisfying body of work.

The remastering is some of the best you’ll find on any rock album from 25 years ago. The sonics are clear and 3 dimensional. This album would sound huge through a pair of big ass speakers (or a battered old set of headphones). 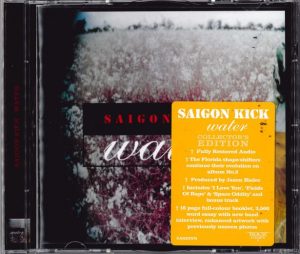