Back in 1991, Jason Bieler’s band, Saigon Kick clearly thought there was a market for bipolar rock and metal. Maybe they didn’t expect it would divide opinion. Or perhaps they did.

More likely it was an attempt to bridge between the Hair Metal heights of the eighties and the new enlightenment emanating from the USA’s Pacific northwest. Or maybe they just didn’t give a monkey’s.

Whatever, they clamped a huge defibrillator onto the moribund arena rock of the previous decade, and jump started the genre. It came alive with intensity, a growling nineties rock beast throwing ideas against the wall, seeing what would stick. Many did.

The hypnotic pop throwaways ‘What You Say’ and ‘Colors’ are clearly included as bait to suck in the bandana rock generation, inevitably falling prey to the relentlessly crushing rhythms of the Tom Defile/Phil Varone bass/drum axis on the fuzz toned ‘Suzy’ and ‘Acid Rain’. Both are densely constructed chunks of melodic noise, with trace elements of Garage Rock and psychedelia in their DNA.

There’s a place too for riffed up hard rock. ‘Coming Home’ and ‘Suzy’ are just bristling with attitude and killer tunes. And room too for anglicised pop rock… put ‘Love Of God’ and ‘My Life’ in a line up and you’d easily mistake them for Red Kross or Cheap Trick.

But, as always, the rock media likes stuff that’s easily pigeonholed, so Saigon Kick’s hugely diverse debut was sidelined in the tray marked “we really don’t understand this, we’re still getting to grips with Nirvana”.

Still, two cracking bonus tracks here, further to enjoy the remastering masterworks that the Rock Candy Tech Team produce. A languidly beguiling, acoustic version of ‘Colors’, and ‘Hey Hey Hey’, which appeared on the band’s 1998 album, Greatest Mrs: The Best Of Saigon Kick. And that’s on top of a new interview with the band, a new essay, new photos and liner notes. Deluxe Edition indeed. 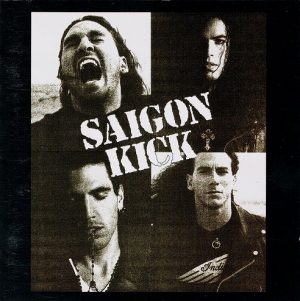