Sacrilegium’s first album in 20 years, was dropped at the feet of the great unwashed recently by Pagan Records and Paul ‘why are we waiting?’ Castles found a copy deposited in his ruc-Sac.

Due to a multitude of problems, or excuses, the gap between a second album and the first can sometimes be longer than anticipated. Well in the case of Poland’s Sacrilegium a full 20 years has passed through the fickle sands of time since their debut Wicher, which, er, stirred a few feathers back in the day.

So without pondering too much about where have all the years gone,  Anima Lucifera is to all intents and purposes a debut release as the band members rightly say they are very different people with different ideals than when they first came together more than 20 years ago.

Back then, the Pomeranian crew were seen as straightforward black metal warriors and while they still retain much of that early ethos and spirit, musically things have moved on. The soundscape is now more esoteric than pure pagan power.

And they’re something of a mysterious bunch too, referring to themselves by only a single initial (Nantur is the singer, by the way) and appearing in their promo pic in black collared shirts topped off with a mauve tie. 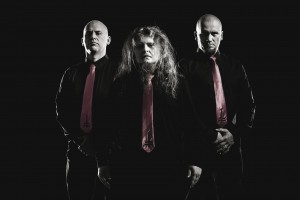 Strip back the initials, tie and shirt and what we’re left with in Anima Lucifera is an absorbing black metal album but one layered with a multitude of facets.

One minute it’s the full on asinine blastbeat chaos and then we’re treated to some wonderfully moving compositions full of beauty and warmth, such as the opening ‘Preludium’ which seamlessly seeps into the raging ‘Heavenwings Shrugged’.

The combination of majestic melancholy and blackened death destruction makes for a mature and confident album. There are some shimmering moments such as the first phase of ‘Angelus’ before Nantur finds the keys to the gates of hell and proceeds to take us in.

On ‘…and Soul’ Sacrilegium allow us a minute of introspective calm that whistles by in near jaunty style before again pulling the plug and waiting for inferno to ignite. But while the flames are chastening the Poles again show they’re not afraid to go against convention by ending the song with an almost folksy finale.

The Polish black metal platform is a fairly congested place thesedays, with no shortage of talent. There is though still room for Sacrilegium to reclaim their seat at the table.