Thin Lizzy’s ‘The Boys are Back in Town’ plays over the PA, the lights go down, the cheers go up, Sacred Reich enter the stage, the cheers go upper (that’s right isn’t it, upper?). Their fifth album – and first in 23 years! – Awakening sounds like they’ve never been away. Politically-charged, socially conscious, and bursting with vigour, positive vibes, and a sincere sense of purpose, it holds a mirror up not just to America, but to the world because, well, the world of today isn’t really that much different to when Sacred Reich first blasted onto the thrash scene in the mid-80s has it? And as pissed about that as he may be, Phil Rind is one of the happiest guys I’ve seen on stage, a big smile across his face from the moment he walks out to the moment he bids us farewell.

Opener ‘Divide & Conquer’ does the exact opposite and brings band and crowd together in metal thrashing madness. And then ‘The American Way’ kicks in and we’re off. Yep, it doth bode well for the evening. Taking his time to greet and talk with the crowd throughout the evening, it’s more than apparent that Phil – and the band, of course – loves every moment of being in a room with like-minded people ready to thrash out to great music. Introducing ‘Manifest Reality’ as the song that pretty much sums up his philosophy, and it’s truly marvellous to see a packed room singing ‘Be the change you wanna see / Manifest reality’ at the top of their lungs. And so it goes for the rest of the set: the band bash out classic after classic and the crowd lap it up. And with every riff, every solo, every beat, and every life-affirming line, the energy in the room just keeps gaining momentum.

With Rind, as ever, is lead guitarist Wiley Arnett, whose playing is smooth with a capital ‘smooooo’. His riffs are potent and his lead breaks are melodic, abrasive, and charged, and all are delivered with such finesse that he makes it looks effortless. But that’s the sign of a great guitarist, isn’t it? Back on the drums is Dave McClain. Dave has nothing to prove but he does anyway. He’s a different drummer in Sacred Reich. The precision, the technique is there, but this band’s songs call for a different feel, it’s aggressive, yes, but the straightforward nature of the songs seems to bring out the nuances of his playing. And it’s incredible to hear. With Greg Hall leaving the band prior to the recording of Awakening, Joey Radziwill was brought into the fold. And this guy, who apparently was born when Sacred Reich released their fourth album, Heal, must be over the moon to be playing with these thrash legends. Yeah, his guitar work is great and he bangs his head like there’s no tomorrow and grimaces as if he’s pissed, but I bet there’s many a moment during every gig when he’s thinking, ‘bloody hell, I’m playing guitar for Sacred Reich! Wha…? Really?’.

‘Love… Hate’, ‘Crimes Against Humanity’, ‘Who’s To Blame’, ‘Independent’ – the classics just keep coming. And for my money, considering the way the crowd responded to ‘Killing Machine’ from the latest album, this gem-to-be is destined to become a classic too. So, after ‘Death Squad’, what does that leave us with? There’s only way to go, and that’s ‘Surf Nicaragua’. Yep, it gets everyone going. How could it not? This was one of those gigs where the band’s finish – as magnificent as the gig was – brings such sweet sorrow. It’s a remarkable experience to witness a band of such pedigree deliver such an outstanding performance. When they were last in the UK in 2017 (the Birmingham gig review is here), Sacred Reich, as far as I know, hadn’t mentioned writing and/or recording any new material. Awakening is a great record. Sacred Reich are a phenomenal live band. Next time we see them – hopefully soon – maybe they’ll have more new material to spoil us with. But if they don’t, it doesn’t matter. Their discography is magnificent enough anyway. Sacred Reich are always welcome, because, y’know, it’s a lovely relationship. 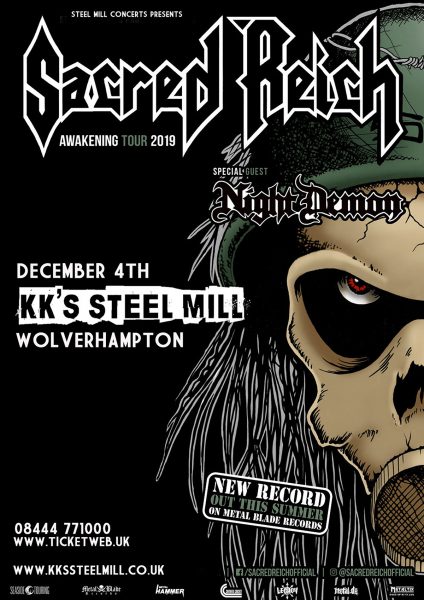