Celebrating 30 years since the release of the band’s first full length, Ignorance, thrash legends Sacred Reich are back in Blighty’s second city for the first time since touring in support of their classic second album, The American Way in 1991. To say that the Home of Metal is pleased to see them is an understatement. This crowd is primed and ready to tear this place down. With old school thrash in the shape of rapid riffs, squiddly diddly solos, and venomous vocals being the order of the evening, what better way to kick off the nostalgia than with ‘Ignorance’ and ‘Administrative Decisions’?

A few words from a humble Phil Rind about how happy he is to be in the birthplace of Black Sabbath and then the monster grooves of ‘One Nation’ are upon us and blasting us into ‘Love…Hate’, ‘Victim of Demise’ and ‘Violent Solutions’. Track after track, it’s clear that 30 years has done little to diminish the power of the songs. Or the band for that matter. Rind and co. are tighter than the proverbial and sharper than a razor. ‘State Of Emergency’ is head banging heaven, as is ‘Crimes Against Humanity’. That heavy metal was the scapegoat for all things evil in the world is addressed in ‘Who’s To Blame’, a song that highlights the unwillingness of a society to face its ills that, unbelievably, still rings true to this day.

‘I Don’t Know’, ‘Independent’ and then a great cover Black Sabbath’s ‘War Pigs’ can mean only one thing: ‘The American Way’ and ‘Surf Nicaragua’ are to close out the evening. Awesome! With UK and American politics a farce (as ever), anti-war, anti-corruption, anti-prejudice, anti-naughty-stuff-that-inflicts-suffering-on-the-innocent, Sacred Reich’s material is, sadly, as relevant today as it was 30 years ago. In a recent interview, bassist/vocalist Rind said that the band isn’t opposed to writing new material. As welcome as new material would be, they don’t need to write any new stuff. They’ve got it covered. And the world is just as stupid as it was three decades ago. 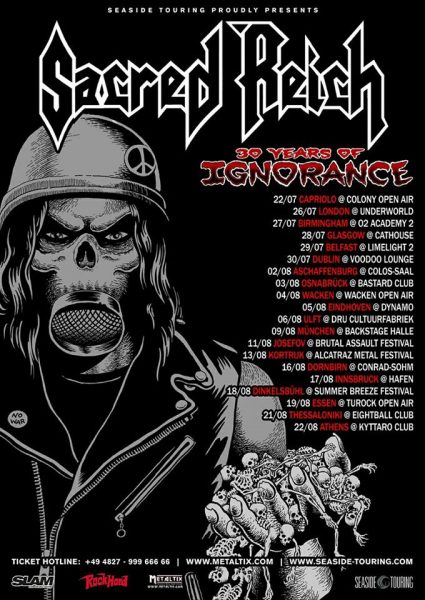