Sabaton played just one UK headliner show and Midlands Rocks caught up on the action midway through the bands Great Tour cycle in which they brought along fellow Scandinavia giants, Amaranthe and Apocalyptica as trusted allies on their arena conquest of Europe. It’s a line-up and show that what will surely cement itself at the top many Gig of the Year lists come December – you heard it here first.

Up first were the Swedes Amaranthe who were warmly greeted with a full-house audience. Even the seats were full for their set which is often an all too rare sight for opening bands on arena runs. With their triple whammy of vocalists doing a splendid job whipping the crowd into ecstasy you’d be forgiven for thinking you were at an Amaranthe headliner gig.

Fans who’ve been following the band since their UK stints earlier in the decade with Kamelot (2011 O2 Islington anyone?) were treated to an onslaught of tracks from the debut album including Hunger and the rave-y Call Out My Name. But Amaranthine was the one that lit up the arena with Elize Ryd’s vocals pulling at the heartstrings of the entire arena.

Tracks like The Nexus and That Song finally got the arena setting they were clearly written for, sounding absolutely massive and well and truly in their element. But it was a very catchy rendition of Drop Dead Cynical that really saw the crowd come to life. The entire standing area of the arena bounced front to back, side to side as Amaranthe’s dazzling rave-fused Death Metal Pop tricks came to a close. This is a big tour for Amaranthe and will surely offer the band a stepping stone for bigger UK gigs in the future than the club circuit or support stints they’ve been confined to. 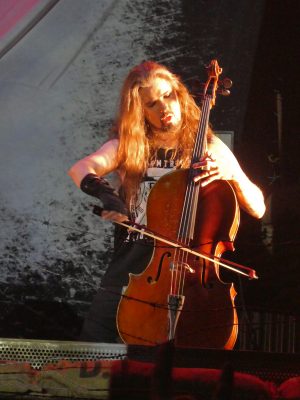 They were followed by Finnish virtuosos Apocalyptica who maximised a 45-minute set to within an inch of its life. The sinister Ashes of the Modern World from new record Cell-0 set the tone and flavour of the evening, flanked by atmospheric stage lighting before the band unleashed the exquisitely gnarly Path on an unsuspecting Wembley. The band followed this with another venture into new school Apocalyptica territory with En Route To Mayhem – a risky move given the album was just released just two weeks before the show – but a welcome one nonetheless.

The set took an unexpected, but welcome turn, when the band brought out Amaranthe’s Elize Ryd to sing two songs with them. The first was a stunning cover of Rammstein’s Seemann which sounding fabulously haunting with female vocals leading the charge. The second was the catchy I Don’t Care – the album version of course performed by Adam Gontier (Saint Asonia/ex-Three Days Grace) – which Ryd absolutely delivered on with the crowd singing every word back on the chorus.

With a few Metallica covers thrown in for good measure in the form of Seek & Destroy and Nothing Else Matters, the bands set surely had something to the tastes of everyone. As usual, Eicca Toppinen, Perrtu Kivilaakso and Paavo Lötjönen threw serious shapes and thrust their cellos in directions that the hard-line classical snobs would have fits of rage over, adding an extra dimension to the overall performance, with a flourish of string bending mayhem, a few wah pedals and palm mute madness chucked in for good measure. 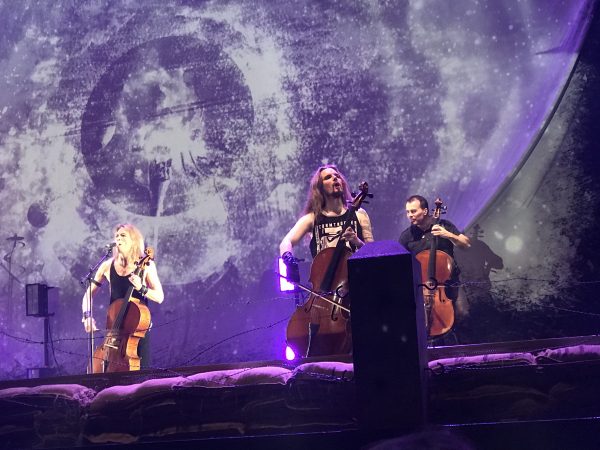 The Hall of the Mountain King shone in its usual glory with Toppinen bigging up the Norwegian Master composer Edvard Grieg proclaiming “Who wants to hear some real Norwegian Black Metal” explaining that long before Black Sabbath maestro Grieg was already pioneering the genre in the mid-18th century.

Whether you like their blend of instrumental classical music meets metal or not, you can’t deny their godly talents which are as at home at the Wembley Arena as they would be Covent Garden or the Symphony Hall playing Mahler or Mozart symphonies. A flawless set containing everything we expect the Finnish masters with their wonderful cellos and so much more. 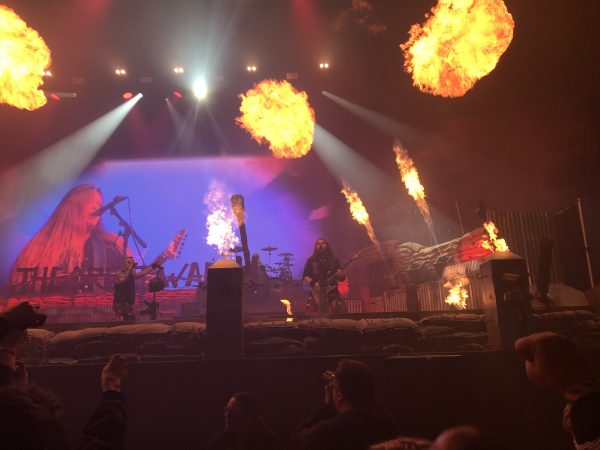 But it was the main act who took the evening to the next level on many fronts like an army parachuting in to take the baton of where its noble allies left proceedings to lead one final charge to secure Wembley. But let’s not get ahead of ourselves. When Sabaton first announced they were playing at Wembley Arena many eyebrows were raised in the world of heavy metal. Sabaton? Playing Wembley? Really? Are they even big enough? But the band had the last laugh defying even the most sceptical metalheads securing a sold-out show on their first headlining visit to the iconic arena.

It’s a moment briefly alluded to by frontman Joakim Brodén during the show referring to the bands now vintage headliner shows from around 2007 at The Purple Turtle in London in front of a mere 250 people. He recalled how critics at the time didn’t think the band’s music would work in the UK, let alone reach Wembley Arena with war fused battle anthems. And yet here they stand in 2020 boasting a stage show that only Rammstein could rival in fire.

There was literally so much fire that you had to pity the poor little soldier in Health and Safety who had to risk assess the bands mental staging. You get the feeling that if their stage pyro budget was doubled, they could maybe, just maybe, take a convincing stab at toppling the German’s longstanding pyro crown. A few more tanks and a life-sized replica of Bismarck and the job should be done chaps. And wouldn’t that be something?

As the dynamic classical Sun Tzu Says faded into the abyss, Brodén’s voice boomed across the arena for his trademark intro speech, “Alright, London, we are Sabaton and this is Ghost Division” as the band stormed out to their battle stations amidst fireworks exploding across the stage. The eyebrows of anyone down in the trenches up front surely went up in flames. 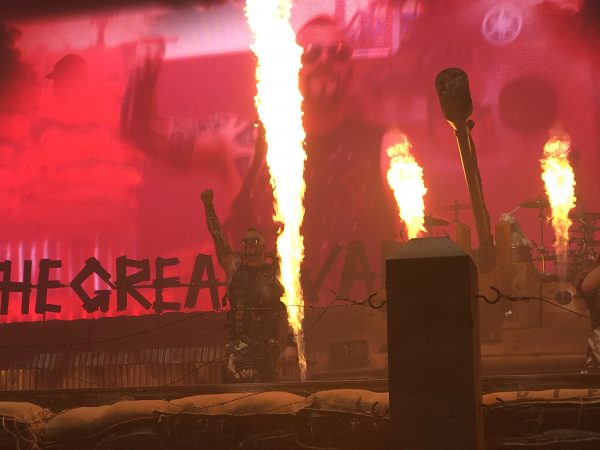 Choirs roared as pyro was spewed from the wall of sandbags and barbed wire set across the frontlines as war was waged and the chorus of Great War towered over Wembley. The battle marched on showcasing war in all its horror and glory with new tracks the Attack of the Dead Men and Seven Pillars of Wisdom unleashing a further blitz of pounding power metal shenanigans.

But arguably the standout moment was Brodén poking fun at the British. “How about we make you sing a traditional Swedish song!” he proclaimed, leading to an impromptu crowd singalong of the word Ikea to the melody of Swedish Pagans, flanked by Broaden playing Richthofen’s Warplane which was converted into a keyboard. Just check out the YouTube footage if you think we’re telling lies. “There’s not many countries I can get away with that without offending people” he chuckled before bringing the rest of the band back for the next phase of battle in the form of The Red Baron and The Last Stand.

The pyro went from the insane to the ridiculous before Night Witches began as rockets shot off Sabaton’s Tank before cumulating in one giant crash, bang and wallop with smoke billowing across all corners of the stage and fire launching from the tank gun. Let’s just say if you didn’t want to be a drummer before you saw Hannes Van Dahl’s tank fortress you would certainly want to pick up the sticks now. The tank envy is still real and as mind-blowing as it was the first moment that they first showcased their tanks on stage many years back.

The treat was the night was the men of Apocalyptica re-joining Sabaton’s legion for an extended segment in the set blasting out everything from Angels Calling to Fields of Verdun to the Lion of the North to Carolous Rex. Cellos joining the ranks of the tanks, warplanes and pyro-city for a good 30 minutes of madness was quite the sight. I mean it’s not every day you’ve got the chaps who gave up their seats in the Helsinki Philharmonic, Finnish Opera and Finnish Radio Symphony Orchestra on tour with you and at your disposal is it? And well used they were, with Sabaton’s Chris Rörland and Apocalyptica’s Toppinen and Kivilaakso playing their war games well with the former pairing striking a guitar with the cello bow on more than one occasion. Both bands genuinely looked thrilled at performing together and we’re feeling pretty smug to have seen it first-hand because it’s probably unlikely such scenes will be witnessed again.

Sabaton’s mega blitzkrieg moment came next upon a darkened stage. Scattered, sprawling explosions ignited on stage as rockets squealed and danced around raging fire coming from the tank. The cannon blasting once again as the war cries of Primo Victoria rang and Wembley jumped like its life depended on it. The show was far from over though with the soaring Bismarck stamping its dazzling authority over a revved-up Wembley before fan-singalong Swedish Pagans and To Hell and Back ended the Wembley War.

Some bands do arenas like it’s run of the mill with little more pyro than the village Scouts Bonfire and then there’s Sabaton’s all-guns-blazing knock you dead approach. This is how you annihilate your maiden headline Wembley Arena show people. 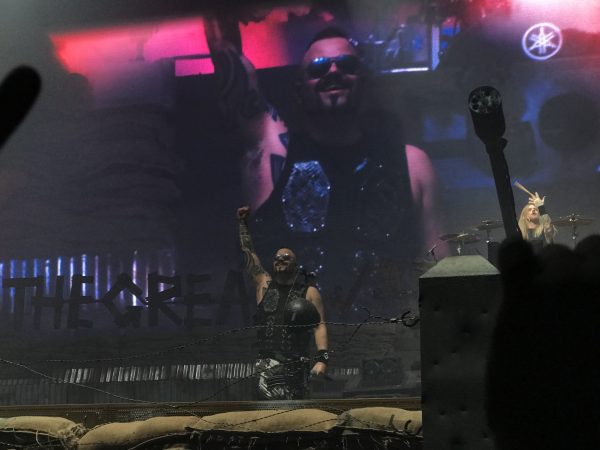 What was refreshing to witness throughout the show was the evident camaraderie between the band members in Sabaton who not only looked thrilled to be playing but fed off each other’s showmanship in spontaneous ways. Whether it was Tommy Johannsson and Rörland doing some epic pick juggling during the show – tossing picks at each other in between riffing and somehow never dropping the others pick – or the band simply coming together front and centre for guitar solos in ways that never looked forced or staged. Even the band misbehaving for Brodén and playing a raft of metal classics before Swedish Pagans was a sight to behold and loved by the crowd.

Perhaps it’s this component that’s propelling them to greater heights than Brodén and Pär Sandström could ever have dreamt back in the late 90’s playing Judas Priest’s Painkiller. They’re a complete unit firing on all cylinders without drama or ego and living the metal dream together with their ever-growing battalion of loyal fans in tow, night after night. 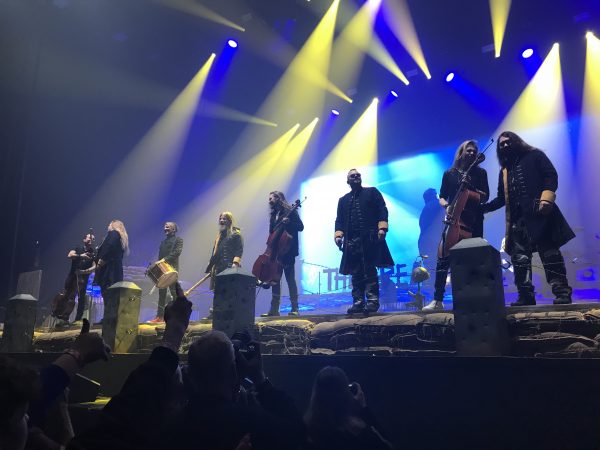 How they top this we don’t know but one thing is for sure, the UK is already waiting for the next chance to join the army down on the frontlines with Sabaton. Arenas be aware of the incoming Swedish invasion because it’s going to happen.

A once unlikely contender for venues like Wembley they might have been but they’ve definitely won this war. Now someone get this band a Rammstein sized pyro-budget and the Victoria Cross because the world of heavy metal certainly needs a few more tanks, spitfires and warships. An unreal performance and one that Sabaton will surely class as a defining moment in their career.