In March 1974 a Canadian power trio released their debut album, self-titled and on their own independent label, Moon Records. Forty years later, that Canadian power trio, with only one  line-up change in the subsequent four decades, are one of the most admired and respected rock bands in the world, hugely influential and acknowledged as such by legions of their fellow musicians, still selling out arenas and possessed of one of the most devoted and passionate fan bases there is. I’m especially fond of a line from a piece in ‘Kerrang’, that said ‘hardcore Rush fans, and by that I mean all Rush fans, there are no other kind’. Now the 40th anniversary of that debut album is being commemorated by Universal Records with a deluxe, vinyl reissue of the album. The LP itself will come as part of a box set, pressed on high quality, audiophile grade vinyl, using the Direct Metal Mastering process and will come with a range of goodies including a reproduction of the band’s first promotional poster, individual lithographs of each of the then band members, a poster of the band’s ‘family tree’ and a card for a free download of the remastered album.

With no advance copies of the album available, it’s not yet possible to assess the new remaster and how it stands up against the CD remasters issued in the 1990s or the Sector box sets in 2010, but with the benefit of hindsight, it’s fascinating to look back at this album and look for the roots of what has made Rush the band they are.  A lot of the album is fairly straightforward blues-influenced hard rock, fully illustrating the band’s own acknowledged influences of people like Zeppelin, Jeff Beck and Cream. However, it is possible even at this early stage, to discern that the band were looking for something more. The instrumental passages of ‘Working Man’ and ‘What You’re Doing’, for example, show some real ambition, and it’s obvious the band were already looking beyond such a basic hard rock sound, and this ambition was developed and fulfilled on their next album, which became one of their finest records, ‘Fly By Night’. When the debut came out, the immediate point of comparison for listeners was Led Zeppelin, the most obvious reference point being Geddy Lee’s vocals, but you can also hear the strong influence of Jimmy Page in Alex Lifeson’s guitar playing, and had the band’s career gone a different way, then that might have been the band’s legacy, a solid, hard rock band, with some decent songs, but then history had other plans.

It’s a bit of a shame there are no bonus tracks with this release, as there are some songs from this point in the band’s history that have never been compiled or appeared on an album. Prior to recording the album, they released a cover of Buddy Holly’s ‘Not Fade Away’, backed with an original song, ‘Can’t Fight It’, and not long after Neil Peart joined, the band played a date at the Agora ballroom in Cleveland, Ohio, which was broadcast by the local radio station WMMS-FM. This show was released on CD a couple of year ago, without the band’s knowledge it has to be said, but it does include more tracks that have never appeared on an album, ‘Bad Boy’, ‘Fancy Dancer’ and ‘Garden Road’. Maybe they’re being saved for a future box set, who knows?

The major way in which this album differs from all its successors is the fact that Neil Peart was yet to join the band. It was drummer John Rutsey who originally formed a band with Alex Lifeson in 1968, and it was he who played on the debut. However, no doubt because he was the singer, Geddy Lee wrote the lyrics for the album, which, with a couple of exceptions, possibly accounts for the fairly standard rock lyrics on the album. Interestingly the major exception is ‘Working Man’, the lyrics of which venture into social comment, and it was this song which really resonated with fans at the time and earned the band most of their early airplay, a strong hint as to the band’s future. Rutsey quit the band after the debut, partly for health reasons, he suffered from diabetes, and partly because he had no real desire to tour. In keeping with the band’s music, he was a solid hard rock drummer, but his replacement not only influenced the band into far more adventurous musical territories, and also assumed lyrical duties, but as a drummer holds a reputation almost unmatched on the current scene.

The great majority of these songs have long disappeared from the band’s live set, apart from ‘Finding My Way’ featuring in the ‘R30 Medley’ on the band’s 30th anniversary tour. Only ‘Working Man’ has featured at all in the band’s live set in the last decade. In a way, that’s sums up the album itself, an integral part of the band’s history, but one that’s now almost completely overshadowed by what came later. 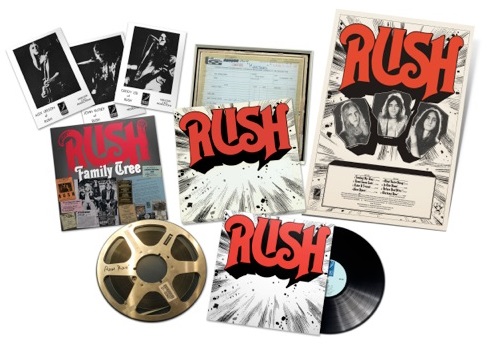